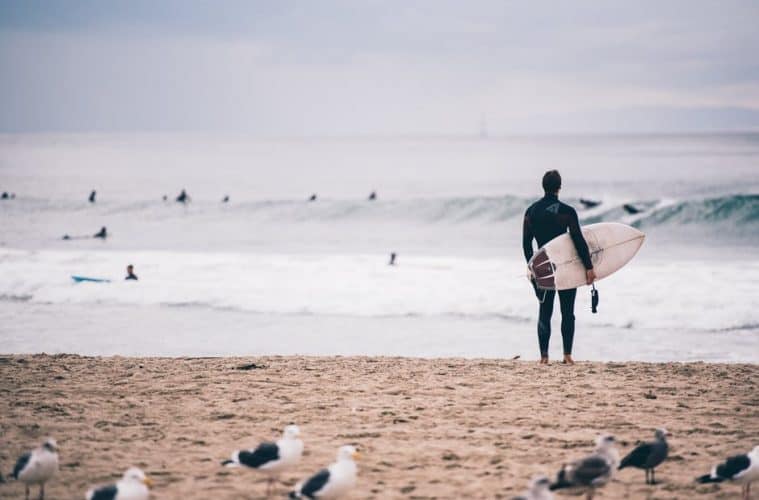 Typically when we read about the world’s best surfing spots we find ourselves being directed towards the West Coast of the United States of America, to Australia, or to Bali on Java in Indonesia, but the reality is that there are many amazing spots for surfing in Europe. That’s why we have created this guide to amazing surf spots in Europe.

Recommended read: Life is better when you surf 😉

From the United Kingdom to Spain, France, and Portugal, the surf in Western Europe can be pretty spectacular when it wants to be! Traveling through Europe on the hunt for the best surfing spots is a great way to spend your holiday in Europe and you may find yourself never wanting to come home. Some of the places might be kind of pricey, but they’re definitely worth the money, so no excuses here!

Check out: Best Camps for Beginners & Advanced Surfers in Europe!

The weather in Europe is unpredictable at the best of times but if you get a good sunny day you could easily be in Bali or on the Sunshine Coast of Australia, for the waters are oh so very blue, clear and, believe it or not, even warm too!

If you are good enough, you may find yourself invited to come and teach at one of the many surf schools along the coasts of Spain, France, and Portugal. This is a great way to travel around Europe, see the world, and teach what you are passionate about!

Peniche in Portugal has for many years been one of the most popular surfing destinations in Europe, and it’s not hard to see why. Peniche is very easy to access thanks to budget airlines like EasyJet and Ryanair that fly to many destinations within Europe for a very reasonable price. If you want to bring your own board, though, you’ll find yourself forking out a small fortune as budget airlines are famed for their stinging baggage prices.

Nevertheless, there are over 200 different surf schools in Peniche from which to learn the ropes before you head out onto the water.

When? The main season for surfing in Peniche runs from September through to October.

Check out our comparison: Best hostels in Peniche for surfers!

In Sagres, the many empty beaches and amazing landscapes won’t let you down. The waves are suitable for surfers of all levels so just find a spot that suits you best. The locals are not the friendliest but if you respect their culture and mind your own business you won’t have any problems. You should definitely visit—Sagres won’t leave you disappointed.

When? The season is all year long but winter can deliver some pretty awesome uncrowded days. 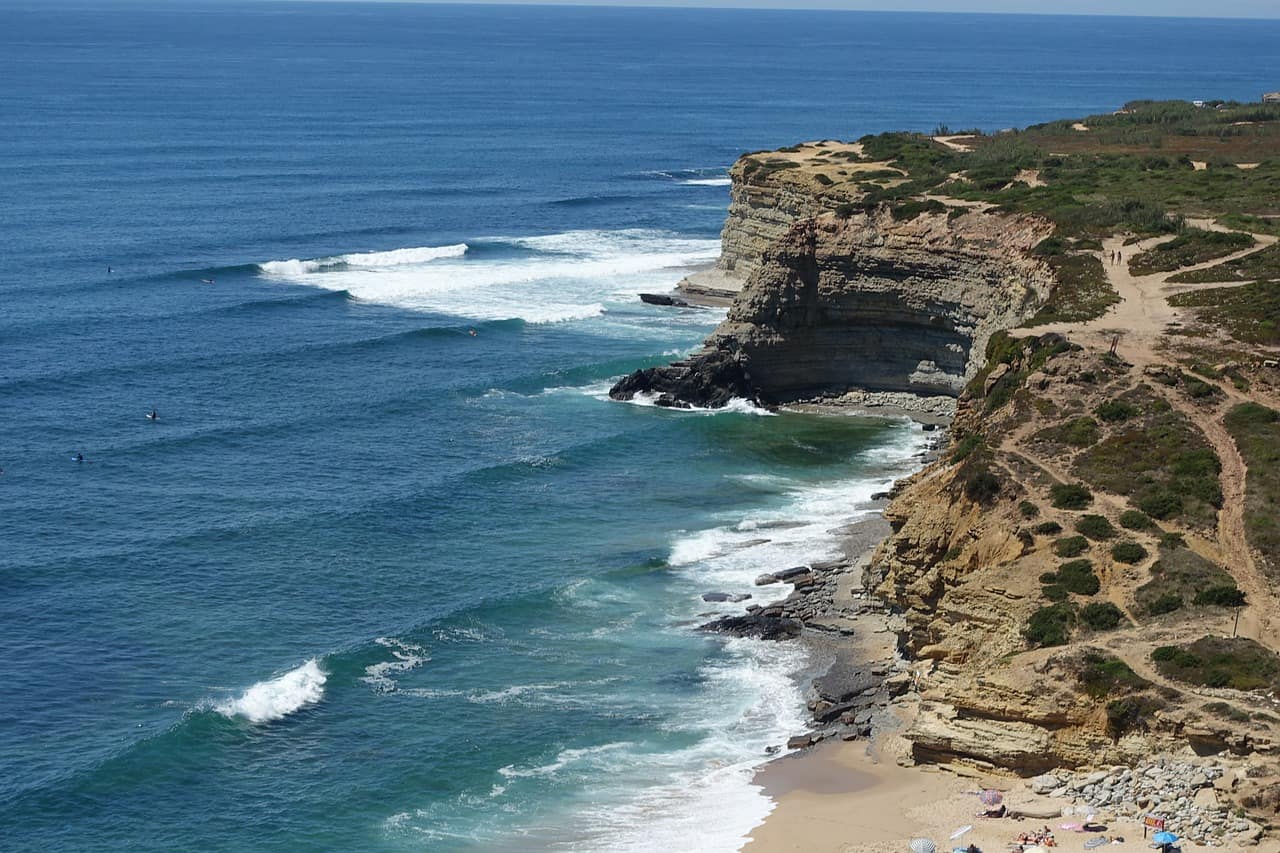 You can find this fisherman’s village north of Lisbon (only 45 minutes’ drive), and apart from fishing, you can find some amazing surfing conditions. There are various surfing spots to choose from, such as Coxos, Foz do Lizardo, Pedra Branca, etc.

Surfing conditions are great for all types of surfers and all skill levels. The beaches are not as crowded as in other parts of Portugal, but you’ll probably want to hit the waves in the off-season.

Ericeira is a lovely town to hang out in, with some delicious seafood restaurants and some hip bars. If you need a quick getaway from the city, you can reach the lovely historical town Mafra in just 15 minutes. There are few surf houses and hostels in the city, so you can easily go on a solo trip as well. You will make friends quickly in this town.

When we think of Spain we think of flamenco and bull-fighting, not necessarily surfing but rest assured that Spain is home to some of the best surfing locations in the world, not just in Europe and San Sebastian is no exception. 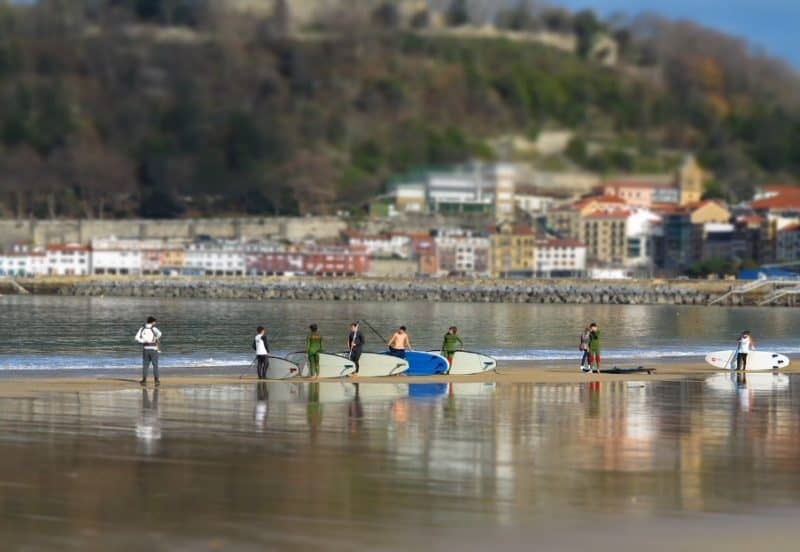 The best time of the year for surfing in San Sebastian is in the winter months. The water is not as cold as in Cornwall, England, but it is still pretty chilly. San Sebastian itself is nothing particularly special; it’s quite built up with tourist resorts, but that’s not what we’re about. We are about the surf, right?

When? The surf in San Sebastian is best in the winter months of November and December. The temperatures sit around twenty degrees, so it’s not too cold to cope!

Accessible from the city of Bilbao, Mundaka is another of Spain’s amazing surf spots. The surf is best in autumn and in spring, and the tepid waters are a joy to be in. The beaches around Mundaka are perfectly clean, with soft, creamy sand. After a long day out on the water, hang out in one of the many beachside bars and cafes and enjoy a freshly caught fish dinner washed down with some classic Spanish sangria.

When? The best times to head to Mundaka for surfing are March and April and September and October.

Playa de Rodiles is located in the north of Spain in the Asturias region. It’s a beautiful surfing spot surrounded by some very steep cliffs. The scenery, Spanish culture, and Asturias region are very lovely and you’re gonna have a wonderful time on your surf trip!

First of all, it’s important to point out that this spot is not for beginners or anybody who is still learning how to surf. Playa de Rodiles is recommended for intermediate and advanced surfers because of the strong rips and heavy wave. The waves reach three meters and it’s a lot of fun.

The best time to surf here is between November and April. The place is loved by locals and can get very crowded.

Make sure to stop by while doing a northern Spain surf trip because this is definitely the best spot to surf in Europe, so you’ve gotta check it out!

Watergate Bay, like Sennen Cove, can be found in the county of Cornwall in southwest England. Watergate Bay is far more popular with holiday-makers and tourists than Sennen Cove and, as such, you will find yourself battling for space in the surf during the summer high season. That said, the best surf at Watergate Bay rises in the autumnal months of September and October. 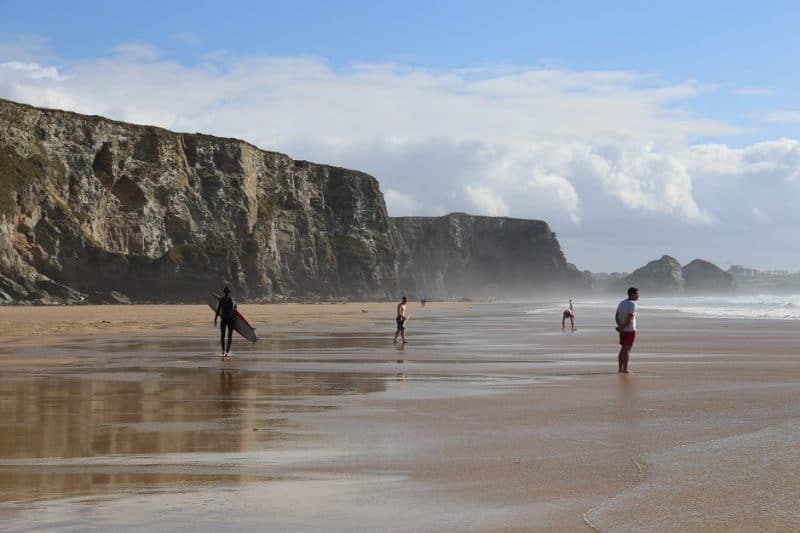 Watergate Bay and Sennen Cove are a short drive from each other so if you are heading to Cornwall be sure to check out both spots and compare notes!

Sennen Cove is one of the United Kingdom’s best-kept secrets when it comes to surfing in Europe. Sennen Cove can be found nestled away in the most southerly county of England, Cornwall. Surfing in the Atlantic Ocean can be bitterly cold at times so make sure that you bring your full suit with you!

Sennen Cove offers a few good surf schools for those who want to learn how to surf or brush up on their skills. The surf at Sennen Cove is good for beginners in the summer—if you can deal with the busy beach, that is.

When? The best surf season for pros at Sennen Cove peaks between September and October.

Again, when we think of France we think of fine wines and Parisian cafes, but Biarritz confidently makes the grade as one of the top ten amazing surf spots in Europe. Like with most places in Europe, during the summer months of June, July and August you will have to battle with the crowds for some half-decent surf, but the best time to surf in Biarritz is in the winter months of October through to December. 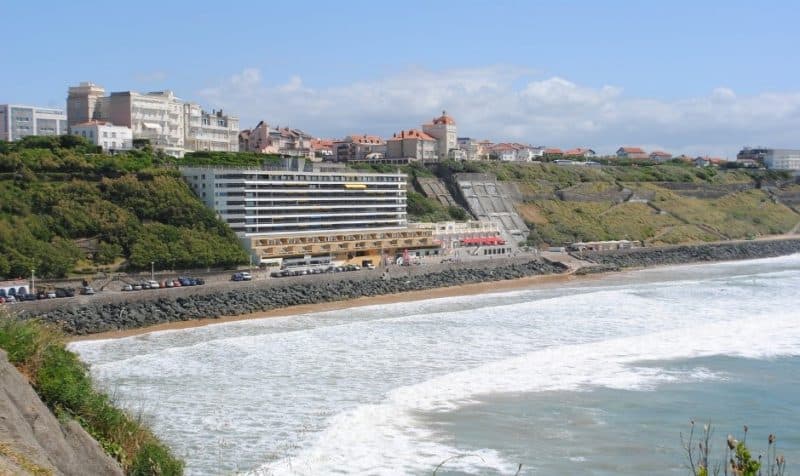 For those looking to learn how to surf in a great location with easy waves, Biarritz is the place to go in the summer!

Sticking with France, our list of amazing surf spots now takes us to wonderful Lacanau, tucked away in the southwest of France on the Atlantic coast. The small town of Lacanau has a typically French feel about it and it’s a great place to hang out for the summer if you want a relaxed and hassle-free existence in Europe. Not as popular as other French beach resorts, Lacanau is a hidden gem of this Western European nation. 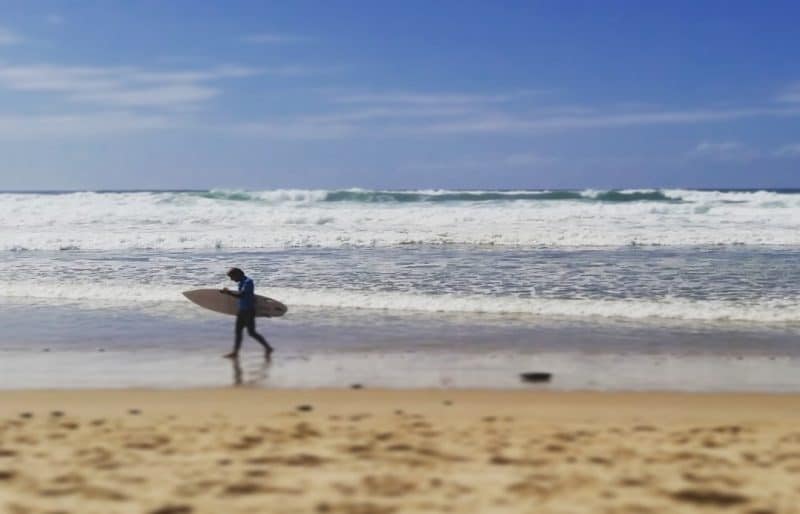 Lacanau has some wonderful beaches, too with some great sand dunes to run down too if you fancy releasing your inner child!

When? – The top months for surfing in Lacanau are January and December when the rideable waves are in excess of 70% consistently.

Hossegor is arguably the best surfing spot in France. Hugely popular with local boarders and international travelers, Hossegor is a must-visit! If you choose to head to Hossegor, then you are in luck: you can kill two birds with one stone and ride the waves at Biarritz too, for it is just a short 43-kilometer drive away. Like with Sennen Cove and Watergate Bay, remember to keep notes to pass on to your fellow surfers.

When? October, November, and December are the months when the surf at Hossegor peak. 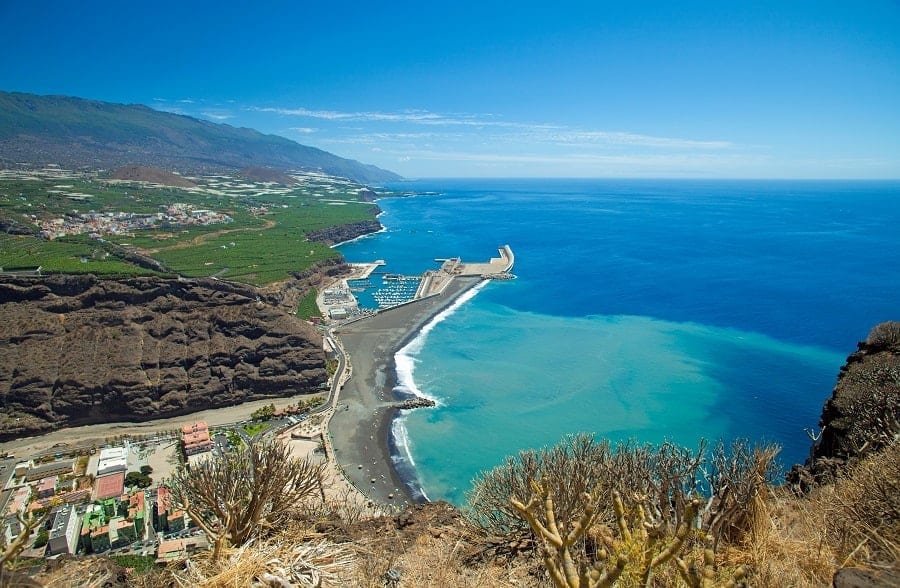 Many people think the Canary Islands are their own country, and in many ways they are, but they are firmly in the Spanish jurisdiction. If you want to eat, drink, chill, surf and meet like-minded travelers, then The Bubble is the place to do it. A popular spot with backpackers making their way around Europe, The Bubble is the complete package. What’s more, there is a tonne of cheap and friendly hostels to stay in here too, meaning you can stay for a long time and a good time.

When? The best surf at The Bubble spans a few months in length, from November through to February.

Playa de las Americas is a lovely town on Tenerife Island which is the main spot for surfing but also for tourism. Therefore, you can start from there but spend some other days in more secret spots. Life there is quite affordable, even during the main season. Its perfect-all-year-long climate makes it an ideal surfing destination for Europeans in the winter. Outside temperatures are between 22–28°C and water temperatures are usually around 19–23°C, and that’s pretty dope, right?

As a highlight, you could consider the view you get while sitting on the board in the water waiting for your wave. Tenerife has the third-highest island volcano in the world and you can enjoy some seriously stunning views from there.

When? The main season for pros picks up from October until February. For beginners, it’s ideal all year round.

Now, here is a country you probably didn’t expect to feature on this list! Ireland’s Atlantic Coast does in fact boast some pretty good surfing spots, and Bundoran Beach is certainly one of them. This beach even hosted the European Surfing Championships back in 2011, just to give you an idea of the wave quality. 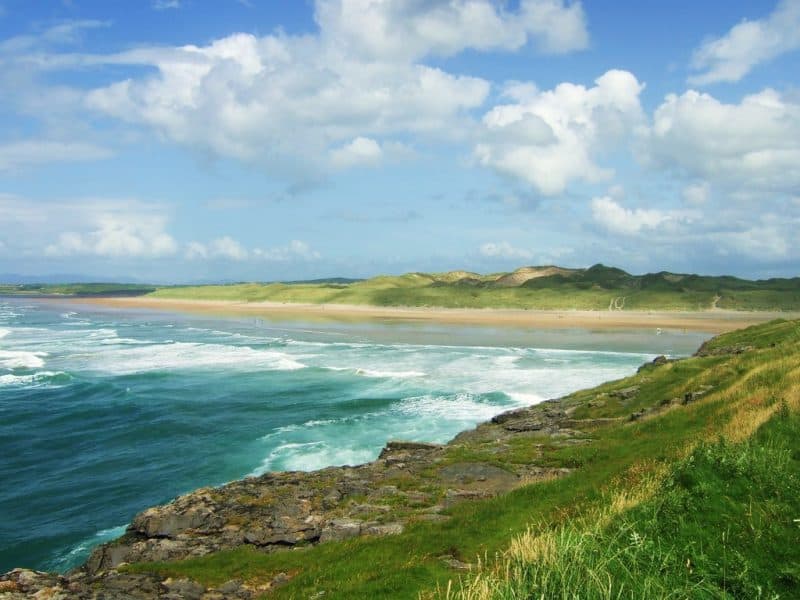 When? As with Cornwall in England, the best season for surfing in Ireland is autumn, between September and October. 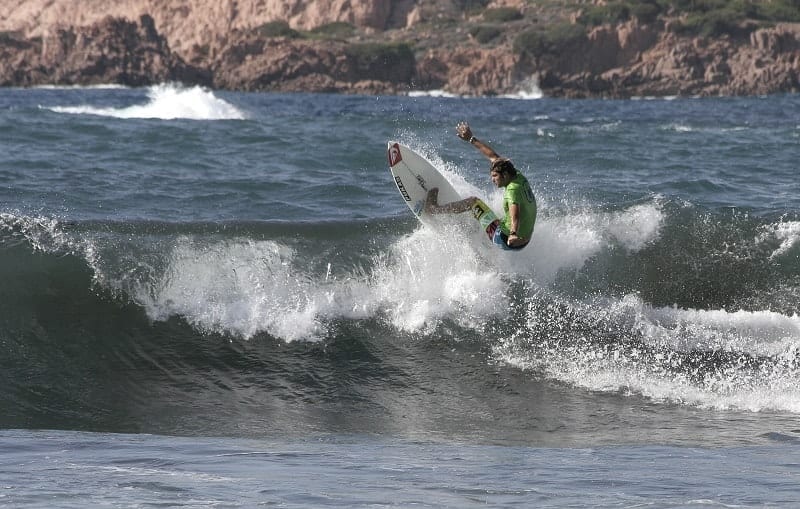 Sardinia has so many surfing spots, you can’t imagine. It has the most consistent waves on the Mediterranean Sea, so you can’t go wrong with choosing it for your surfing holiday. During the summer you can chill on the beaches on the sunny days and enjoy the waves on the windy ones. It also has many cultural monuments and hiking trails you can explore while you are on the island.

When? The best time to surf in Sardinia is winter.

Author Bio: Linda is the founder of easytravel4u.com. She is passionate about traveling, and is excited to share with you all her travel experiences and tips. Connect with her via Twitter and Facebook.