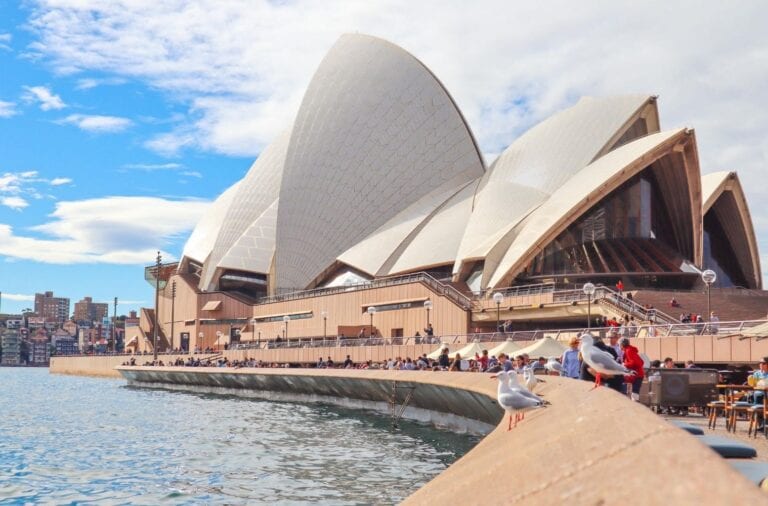 Australia Is Open for Tourism With Some Entry Restrictions

RELATED:
– When is Bali opening for tourism?
– Singapore open to tourists from 5 countries
– Is Malaysia open for tourism?

International tourists who have been double-vaccinated don’t need to quarantine, but domestic visitors must be triple-vaccinated in order to be allowed entry.

Passengers will still need to fill out a G2G border entry pass and show proof of vaccination by scanning a QR code at the airport.

Travelers who haven’t been vaccinated or who don’t have a medical exemption must be subject to hotel quarantine.

When will Australia reopen borders for tourism?

Unfortunately, it does not appear that Australia will be reopening its international borders for tourism anytime in the near future, as Prime Minister Scott Morrison and other government officials have announced multiple times.

February 8 – Australia to reopen borders for international tourism on Feb. 21

All foreign tourists will be allowed to enter Australia from Feb. 21, said Prime Minister lifting one of longest border closures worldwide.

The borders will reopen to all visa holders “on the 21st of February of this year.”  “The condition is you must be double vaccinated to come to Australia. That’s the rule. Everyone is expected to abide by it,” said the Minister.

The decision comes following a meeting of Cabinet’s National Security Committee on Monday.

The reopening of Western Australia on Feb. 5 has been postponed indefinitely to allow residents to receive booster shots.

According to the WA premier, Mark McGowan, “the world changed in December” following the discovery of the new highly contagious Omicron variant so it would be irresponsible and naive for authorities to downplay the facts.

“Allowing hundreds or thousands of Omicron-infected people to fly straight into Perth from 5 February with no testing, no quarantine and no public health measures would cause a flood of COVID across our state,” said the Premier.

Australia has recorded more than a half-million COVID-19 cases in the last week, which represents nearly the 50% of the total reported over the pandemic.

In order to avoid a potential health “catastrophe,” two West Australian epidemiologists are urging for the state’s border opening to be postponed.

However, Prime Minister has been clear about the options available to Australians: “You’ve got two choices here: you can push through or you can lockdown. We are for pushing through.”

Beginning Tuesday, December 21, fully vaccinated overseas tourists visiting Sydney and Melbourne will no longer be required to quarantine for 72 hours.

There’s a catch, though. Passengers will be required to present a negative Covid-19 PCR test within 72 hours of boarding and another one within 24 hours of arrival instead, said the premiers of New South Wales and Victoria in a joint statement.

“We know it has been a challenging…with the emergence of the Omicron variant, but this announcement is about simplifying the process and making sure Australia’s two biggest cities have a consistent approach,” said NSW Premier Dominic Perrottet.

December 15 – Australia will reopen to fully vaccinated travelers from South Korea and Japan on December 15.

Australia’s Prime Minister has confirmed that the country will reopen to fully vaccinated travelers from South Korea and Japan starting Wednesday, Dec. 15.

The reopening will also benefit international students and skilled workers.

“We will move again forward. The borders will be reopened both to Korea and to Japan and for skilled migration and for students as we conclude the pause that we announced several weeks ago.”

The restriction applies to international students and skilled migrants who have been in any of the above-mentioned countries within the past 14 days.

The country has also temporarily paused plans to reopen for international tourists to avoid a major spread of the Omicron variant.

Once South Australia reopens its borders on Nov. 23, fully vaccinated residents will only have to quarantine if they are proven to be in close contact with a COVID-19 case.

The revised guidelines include a new category called “low-risk casual contact,” which applies when a vaccinated person has been in the presence of a COVID-positive person for less than 15 minutes.

In this case, those people are not required to quarantine or get tested.

Unvaccinated people in the same situation will have to quarantine for 14 days instead.

Citizens and permanent residents of Australia can now travel abroad without government permission starting on Nov. 1.

As a result of the policy change, fully vaccinated Australians will no longer be required to quarantine upon arrival in New South Wales, Victoria, or the Australian Capital Territory.

In addition, the country will initially allow international visitors from New Zealand and Singapore.

Australia’s Prime Minister said on social media that Australia would allow travelers from Singapore from Nov. 21.

October 12 – Australia reopens economy as it learns how to live with COVID, tourism won’t reopen before 2022

On Monday, Sydney reopened cafes, bars, restaurants, and gyms after nearly 100 days of lockdown due to a local spike in cases.

Authorities have said they will no longer pursue the virus-free strategy and instead they will need to learn how to live with COVID.

New South Wales (NSW) state Premier, told reporters that infections are expected to rise now and that Western Australia and Queensland will be observing the developments in Sydney to avoid potential errors that could lead them to a hospital capacity emergency.

Australian Prime Minister mentioned at the last press conference that skilled immigrants and international students will be a priority for reopening. Tourism most likely won’t reopen before 2022.

Australia’s Prime Minister Scott Morrison has announced the reopening of international borders before Christmas for all states that have reached an 80% vaccination rate.

According to NSW Premier Gladys Berejiklian, the country is currently reviewing the pilot program, and the first two states to benefit from the reopening will be New South Wales and Victoria.

“We are going through the pilot as we speak… The reality is we can’t live in a bubble forever and that goes for every state but it also goes for us as a nation,” she told Sky News on Tuesday night.

Berejiklian also warned Australia has to reintegrate into the world regardless of the health experts’ advice.

Australia has extended its “biosecurity emergency period” through December 17. This means that international travel will remain banned at least until that date.

However, Qantas airlines has scheduled flights to Singapore, London, Los Angeles, and Vancouver on 18 December and more for the following week.

Although Qantas’ CEO has done this before, this time he seems to have support from the government.

“They [the Australian Government] agree with our broad assumptions, and agree that our plan is reasonable.”

The Melbourne-based Doherty Institute suggested a change on the current zero-cases strategy, to limiting the number of hospitalizations and deaths. This way, Australia could reopen when 80% of its population is fully vaccinated.

“It doesn’t matter whether it’s 30 cases or 800 cases, the conclusions are the same, and that’s what the Doherty Institute said… we can do this safely and we do need to do it,” said Prime Minister Scott Morrison on Tuesday.

As of today, only 30% of Australia’s adult population has been fully vaccinated.

“This is the next step in our plan to safely reopen, and to stay safely open,” Morrison went on to say that the trial could set a standard for how to “live with COVID-19.”

The caseload continues to soar across the country but the government is sticking to plans to start a gradual re-opening.

Australian and Canadian airlines have already scheduled flights for December.

The Trans-Tasman travel agreement between Australia and New Zealand has been shut down for 8 weeks due to a spike in coronavirus cases in Sydney.

“There are now multiple outbreaks, and in differing stages of containment, that have forced three states into lockdown. The health risk to New Zealanders from these cases is increasing,” told reporters Prime Minister Jacinta Ardern.

Sydney reported 239 new cases in the last hours making it the worst outbreak seen in months. The state’s premier, Gladys Berejiklian, announced the enforcement of stricter measures in eight areas “of concern.”

Australia heavily tightened its COVID curbs from today, following a spike in coronavirus cases in Sydney and Canberra.

Effective August 12, all people who “ordinarily reside in another country”, meaning, if they “spent more time outside Australia than inside in the last 12 to 24 months” will need to demonstrate they have compelling reasons to leave the country.

Australia is seeing a worrisome epidemiology situation to its standards. Also today, the government called extra military forces to ensure compliance with lockdown measures after its capital Canberra reported its first locally transmitted case with no links to other patients.

“We are making sure that we do not leave any stone unturned in relation to extra (military) resources,” New South Wales state Premier Gladys Berejiklian said at a media conference in Sydney.

Different industries have welcomed the four-phase plan released by the government following the National Cabinet meeting on July 2 aimed at reopening international borders.

In phase 2 (post-vaccination), students and business visitors will be allowed in.

In phase 3 (consolidation), there would be no lockdowns and no limits on returning vaccinated travelers.

In phase 4 (final), life will return to “almost” normal but unvaccinated travelers will still need to do pre- and post-flight testing.

The date where these phases are supposed to happen has not been released yet. However, Prime Minister Scott Morrison expects that the limited number of returning travelers (phase 3), should be in place at least until the beginning of 2022.

Australia could trial a pilot program that would bring back international students from a limited number of countries over the months to come.

The new “green light, red light” system would allow vaccinated people “who pose no health risk” to come back to the country after almost a year and a half of closure. (Source: India Today)

The proposal came after Prime Minister Morrison told The Weekend Australian the government will spend the next six months monitoring the spread of new highly-contagious variants, and the effectiveness of vaccines before reopening their international borders.

June 8 – Australia might reopen a travel bubble with the U.K., and the U.S. according to Qantas CEO

Trade and Tourism Minister Dan Tehan has officially announced the federal governments of Australia and New Zealand are working on expanding the existing quarantine-free travel bubble to include at least 5 island countries in the Pacific.

For its part, Qantas CEO Alan Joyce said last week that the reasonable next step would be to put the U.S. and U.K. next on the travel bubble agenda.

Minister Tehan immediately backed him up by telling reporters that “Alan has definitely got the right idea”. “We want to build on the success of our travel bubble with New Zealand. Six weeks now, we have had a two-way travel bubble and it is working very well,”

However “[We] have got to remember at the moment there are over 3,000 active cases in the U.K. and the U.S. each day, so still a long way to go there for them in dealing with the virus and obviously, once they can get on top of that, we can start looking at these things,” said Tehan.

May 11 – Australia is considering a three-principle roadmap to reopen

As stated by Health Minister Greg Hunt, Australia is considering reopening the country when 3 principles are met.

Thus, the country will reopen when/if,

According to early looks at the 2021 federal budget, “the assumption is that international borders would reopen in 2022”, said an Australian spokesperson.