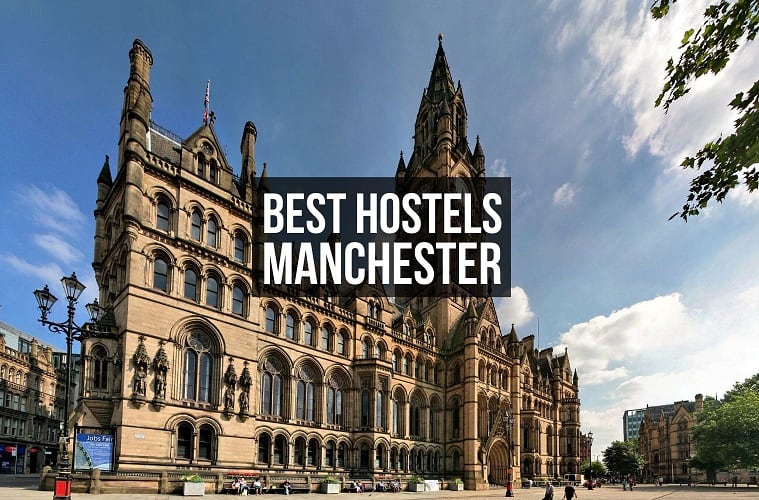 3 Best Hostels in Manchester for Backpackers in 2020

Manchester is famous for its amazing music scene, cultural events, diverse food, and museums and galleries. Located in the North of England, many visitors are tempted to skip the industrial city. But with the great airport, bus and train connections, it’s really easy to include it in your UK itinerary.

Make the most of your stay by bunking down in one of these great rated hostels. 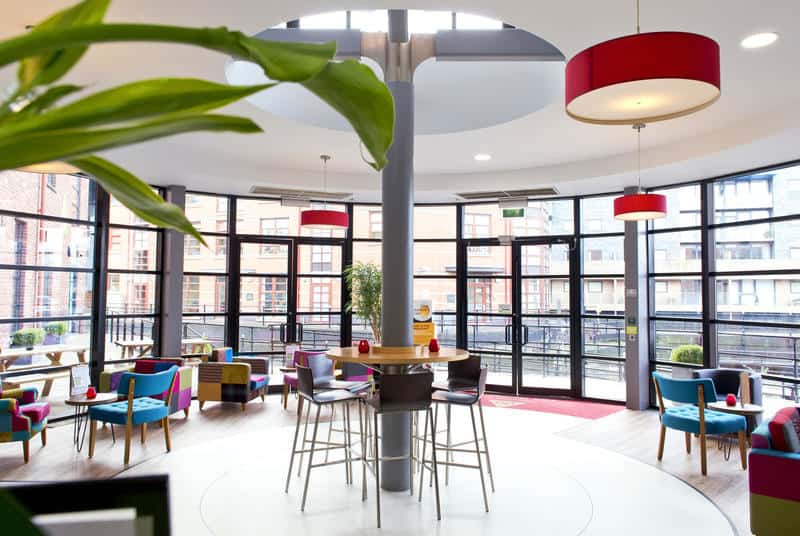 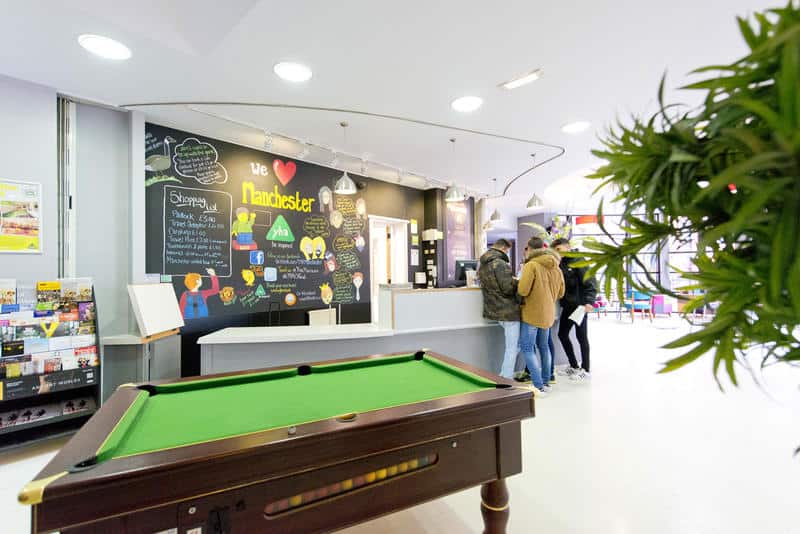 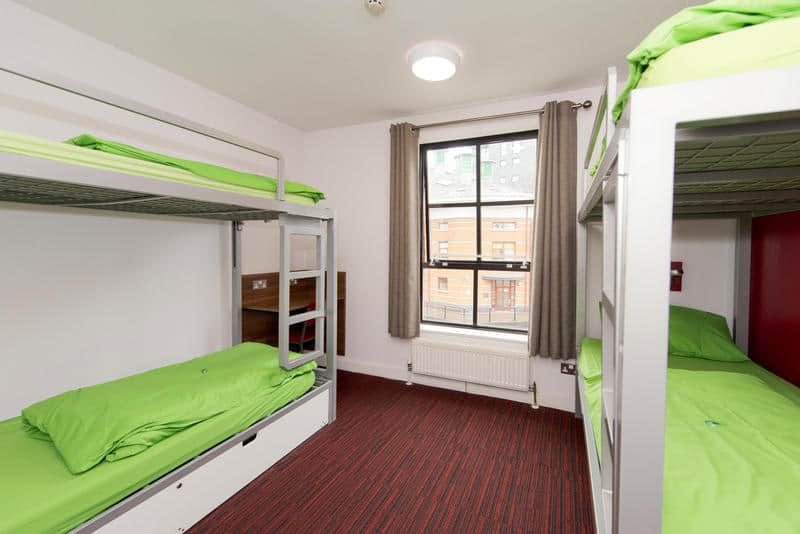 There was a time when YHAs were the norm in backpacking. You had to have a membership card and everything. Today, they have a bit of an old-fashioned reputation and are associated with school and scout groups. But there’s nothing fusty about the YHA Manchester. After an extensive refurbishment, it offers high-quality hostel accommodation in a nice canal-side setting.

First off, you won’t be staying in 10-bed warehouse dorms. The standard is a 4-bed ensuite with large comfy bunk, each with its own storage space. The common areas are bright and warm so you can kick back with a game of pool or table football, or just enjoy the free wi-fi while you sit with a coffee and plan your day. If you’re self-catering, there’s a communal kitchen with everything you need to create a feast. But if you’re feeling lazy, there’s also a canal-side restaurant serving modern British classics.

There’s also a large well-stocked information point. You’ll be able to find information about everything that Manchester has to offer, maps, and what’s on. You can even check out events further afield, for example, things to do in Dublin if you’ll get bored in Manchester and would like to explore other cities around.

The hostel offers a huge cooked breakfast for an extra £5.75. You might find cheaper options at a local café or a Wetherspoons pub, but for the convenience factor that’s pretty good value.

One thing to note is that the YHA Manchester is not in the center of the city. It’s a 10-minute walk to Deansgate station which is just two stops from Piccadilly.

But why not take advantage of the hostel’s position to do a canal walk! The canal forms part of the Cheshire Ring Canal Walk. At 158 kilometers, it is a bit too long for a weekend stroll, although you can just do shorter parts of it. Other walks along the canal include The Salford Trail, which is divided into ten shorter walks. It’s even possible just to walk into the center of Manchester along the quiet canal route.

Did you know? The Manchester Ship Canal runs 58 kilometers, linking Manchester with the Irish Sea. Its construction allowed the city to become Britain’s 3rd busiest shipping port, despite being 40 kilometers inland. 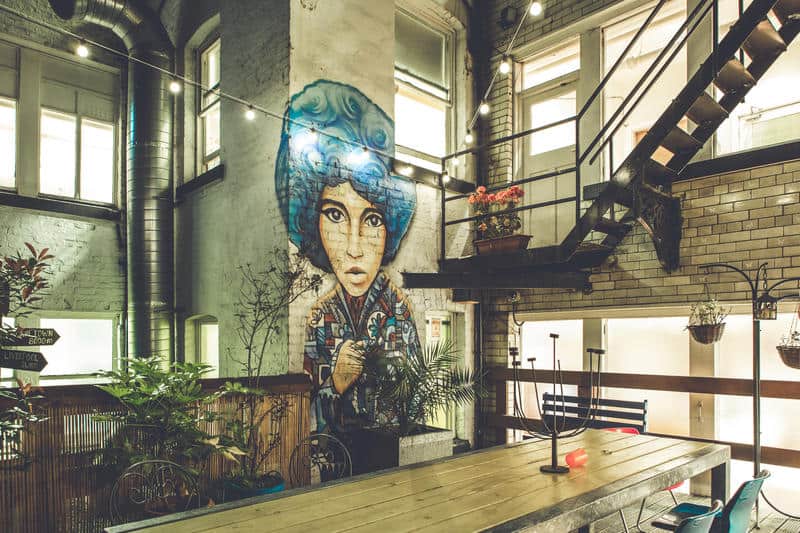 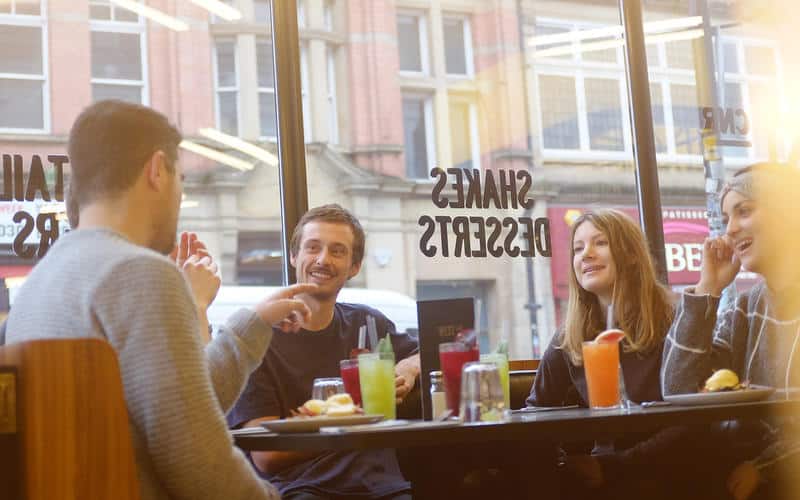 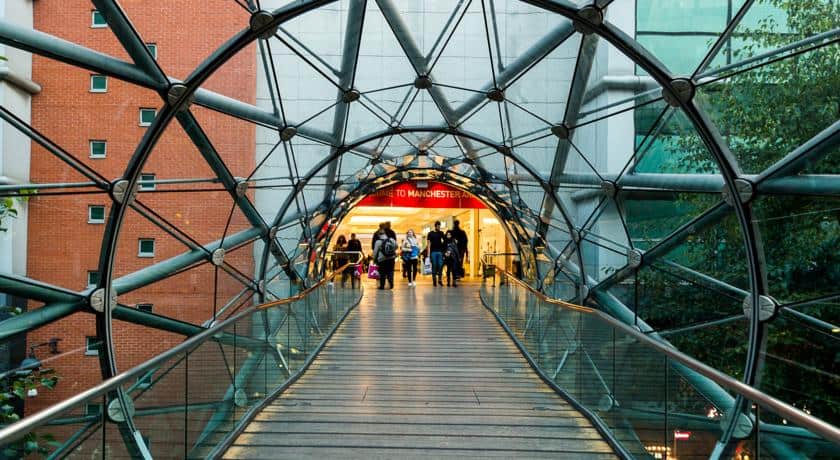 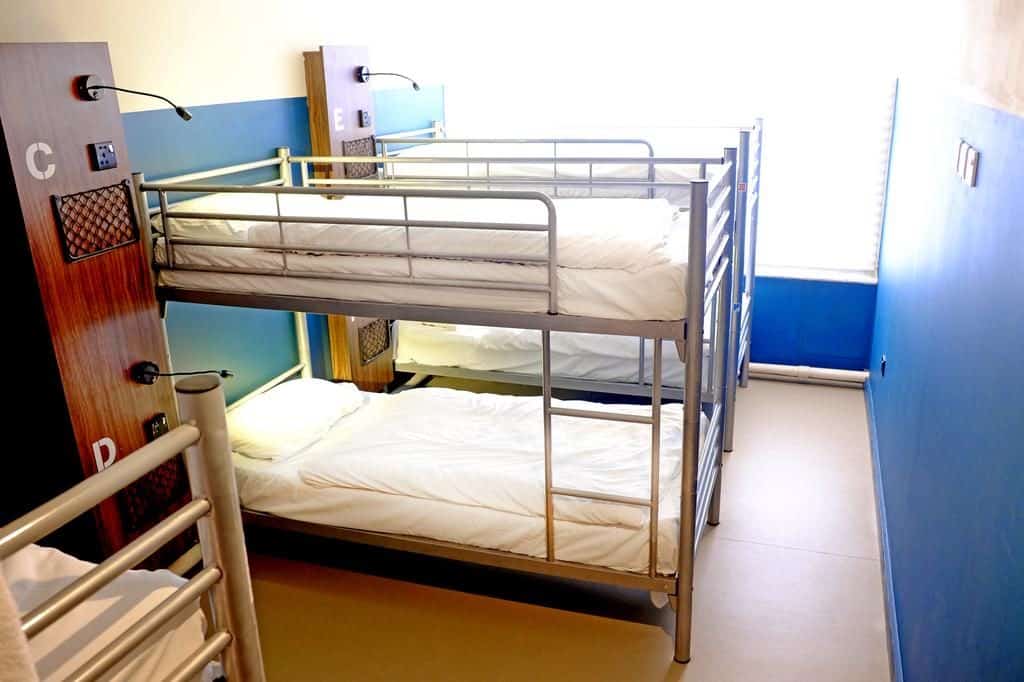 If you’re looking for something more central, then Hatters is the place for you. It’s definitely less fancy but offers a range of dorm types to suit every budget. Rooms have either four, six, eight or ten beds and there is one female dorm available.

The hostel caters well for groups. So if you’re going to Manchester with a bunch of friends, you can take a private room option. These come with either six or eight beds. Kids under 16 are allowed to stay if they’re accompanied by an adult.

Hatters at Hilton comes with all the facilities you expect from a hostel. There’s free wi-fi throughout and a large communal kitchen. There’s also an on-site diner and restaurant which offers food until midnight. 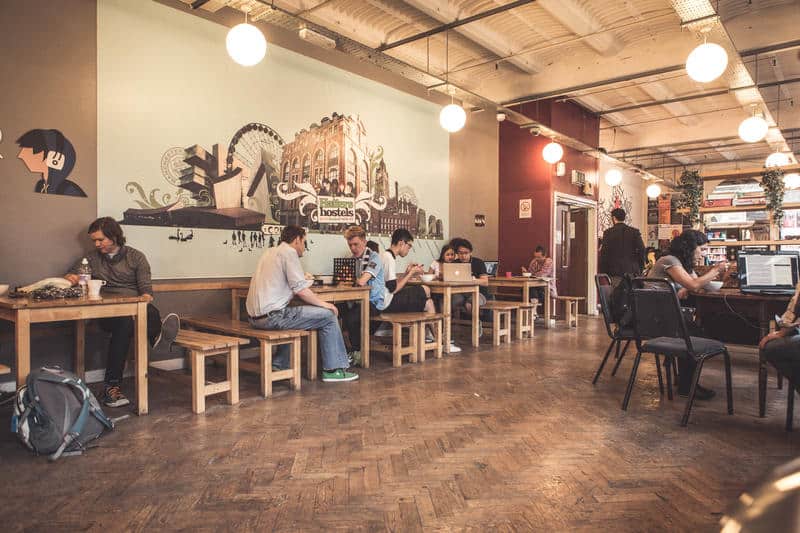 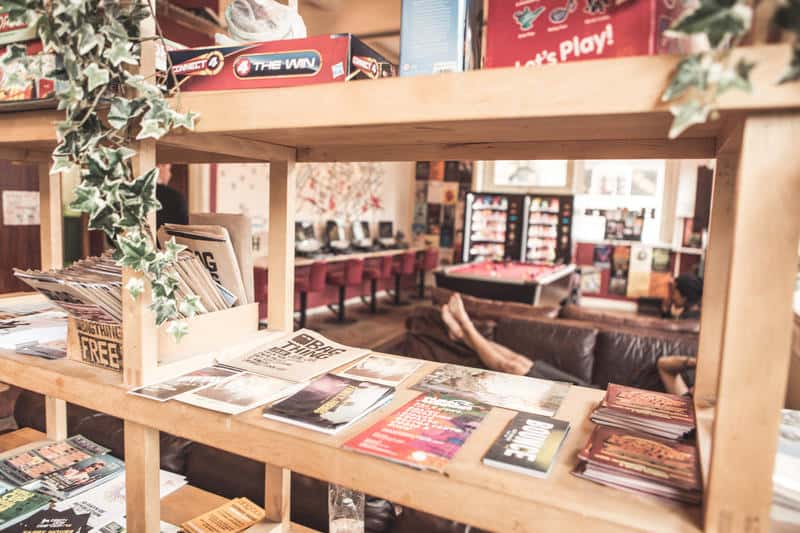 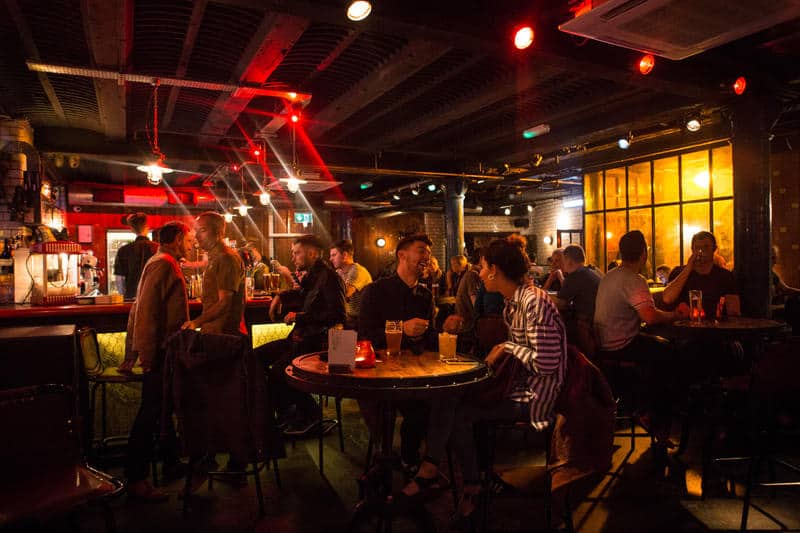 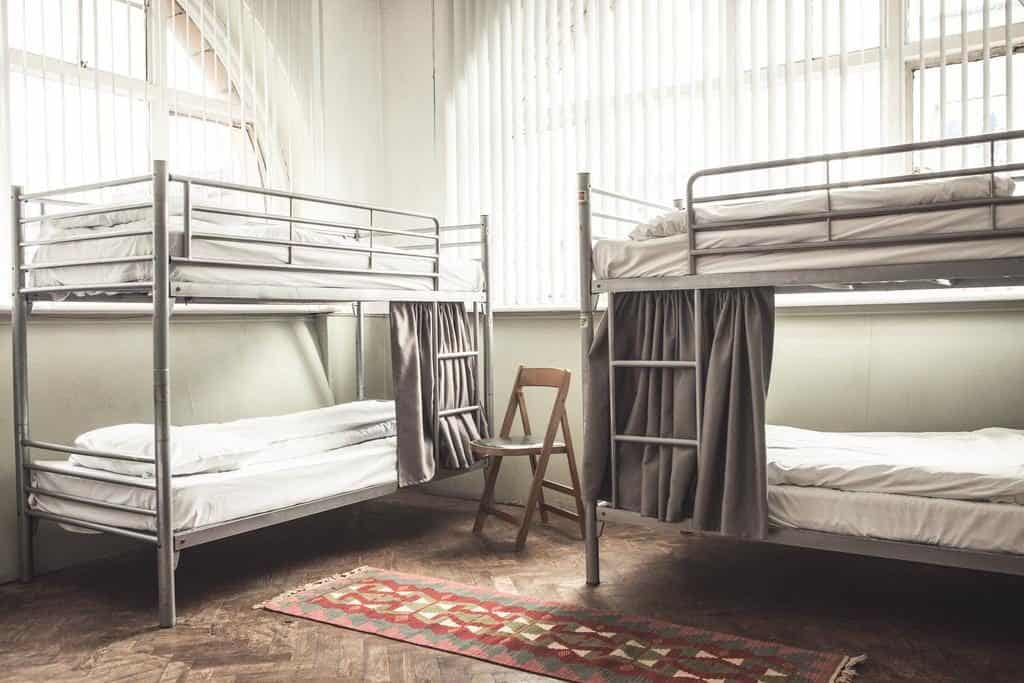 Housed in a beautiful old Victorian terrace, Hatters on Newton is the sister hostel to Hatters at Hilton, about 200 metres down the road. The building used to be a bowler hat factory which is where the name comes from.

The great thing about this hostel is all the social events it puts on. They offer a pub crawl, games night, film night, free food night and a free walking tour around Manchester. It’s also the only hostel in the city to offer a free continental breakfast each day.

For sleeping arrangements, Hatters on Newton tends to offer larger dorms. There are four, six, eight and ten bed mixed dorms, and a ten bed female dorm. For the truly adventurous (or those on a tight budget) there’s even an astonishing 18-bed dorm! But for around £16.50 per night, you won’t find anything cheaper this close to the city centre.

Both of the Hatters hostels are brilliantly situated right in the heart of Manchester. There are loads of interesting cafes and bars in the surrounding streets and some great music venues are close by. Nearby, Castle Pub has local brews and bands and is open every day from midday. Just a few minutes walk away is Band on the Wall, which hosts bands and musicians from around the world almost every night of the week.

Fun fact: Band on the Wall got its name because bands used to have to play, literally, half way up the wall. 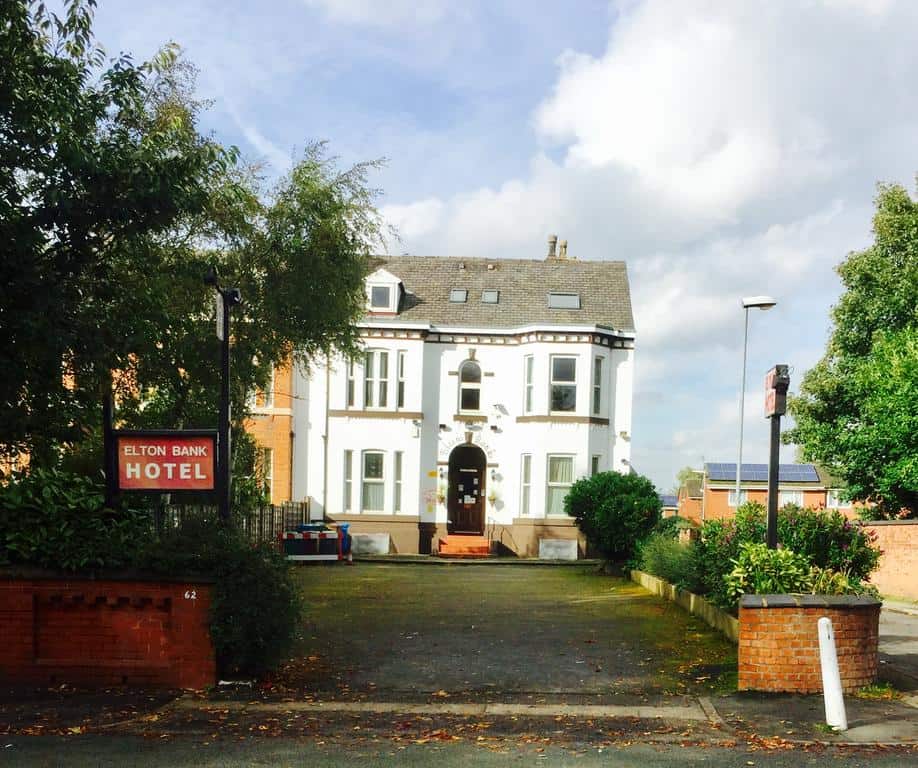 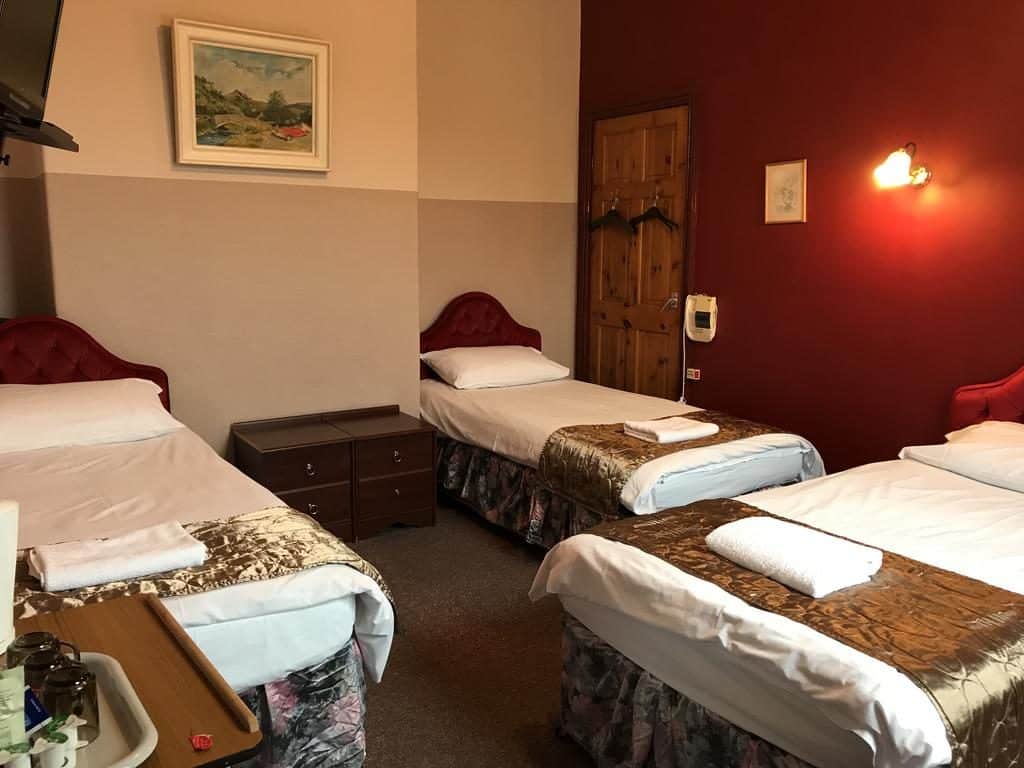 If dorms aren’t your thing, private single and twin rooms are available at decent rates at Elton Bank Hotel. For just £29 per night, you can have your own room, or £45 if you’re travelling in a pair. Rooms don’t come with an ensuite so you will have to share a bathroom.

The hotel is located a few kilometres out of the centre, but it is easy to get into town by public transport. The bus takes about 15 minutes and runs every 10 minutes until 11:30pm. Alternatively, an Uber costs approximately £5.

Elton Bank Hotel is in a nice quiet neighbourhood, right on the beautiful Platt Fields Park. The centrepiece of the park is a boating lake, where you can even try your hand at fishing! But if that doesn’t fill you with excitement, you can always try out the BMX track, or simply explore its winding paths.

Manchester is a deceptively large city, and people are often surprised how to spread out things are. That’s a benefit though, because even in this quiet neighbourhood you can find some real gems. Other than the park, the university is close by.

And best of all, Manchester’s famous Curry Mile is right on your doorstep. Starting from the hotel, a walk along Wilmslow Road will reveal dozens of restaurants and take-aways serving the best of India, South Asia and the Middle East. For authentic north Indian cuisine, try out Mughli. For a fun flambé right at your table, visit Spicy Hut. And finally, Sanam will satisfy everyone’s sweet tooth with its range of Indian and Arab sweets. 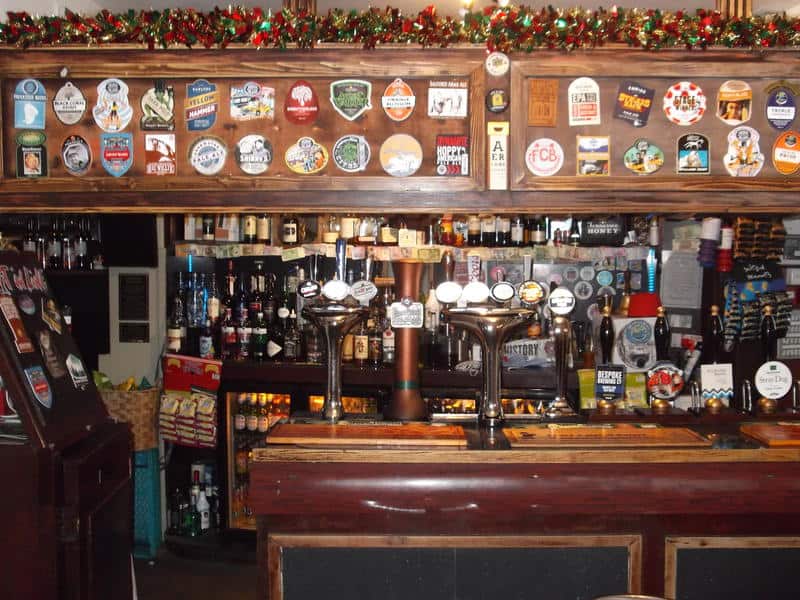 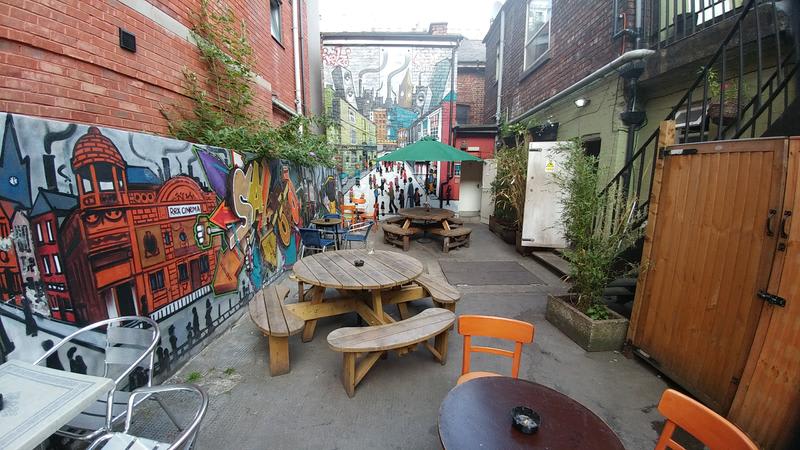 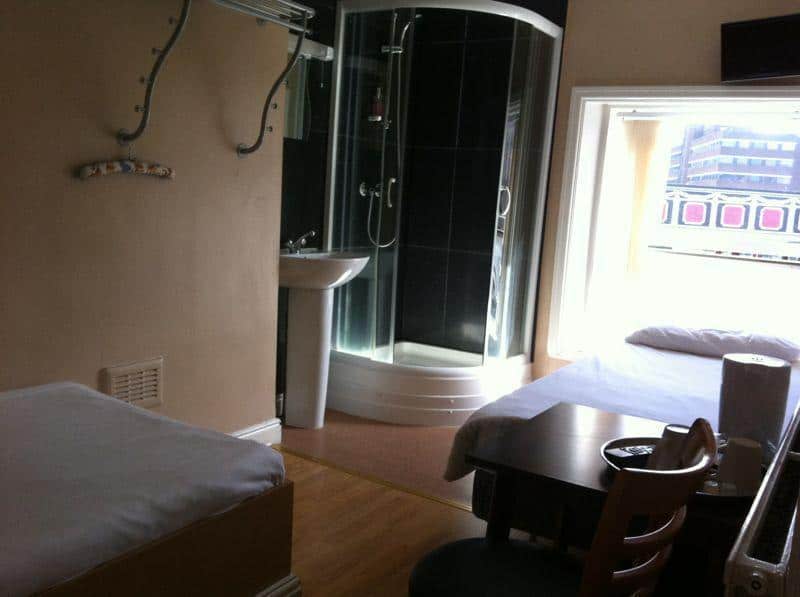 Located above a pub, the Salford Arms Hotel also offers private accommodation in double or three bedrooms. A double room is £46 per night, and a triple will set you back £69. While the rooms don’t have ensuite toilets, each room does have a wash basin and a shower.

Salford Arms isn’t right in the centre, but is just a short walk across the river. Along the river, you can find some nice upscale restaurants. For craft beers, try out The Dockyard Spinningfields, or for stone-baked pizzas, you absolutely must visit Artisan.

Keep in mind, the Salford Arms is a pub and the rooms are on the first floor. You can definitely hear the noise from the pub until after midnight on Fridays and weekends. If you’re in Manchester to party or to go to a gig, then that probably won’t bother you. But if you’re more of a museum and gallery and early night person, it may not be ideal.

Manchester is a great city to visit for music, food and culture. Staying in the centre on a budget will mean sacrificing some luxuries (like an ensuite toilet) but it’s not impossible. Further out, there are better options which are both affordable and offer good facilities.

The good news is that Manchester is well served by a decent bus system. And even the hotels and hostels listed here that are further out are only a few kilometres from the centre. If you don’t fancy public transport, an Uber is a fairly affordable option to get to most places.

Most of all, come to Manchester with a sense of adventure. Chances are you will find something interesting in the most surprising places.