Cologne is a gorgeous German city that has been attracting visitors with stunning landscapes and amazing attractions for many years. What’s more, they are plenty of day trips from Cologne that you can take!

The museums are fascinating, the castles are breathtaking and the wine is superb. The character of Cologne is both charismatic and fascinating. Famous Cologne Cathedral is one of the most popular tourist historical sites & landmarks in Germany and you should definitely not miss that one!

Here are the TOP 8 day trips from Cologne 🙂 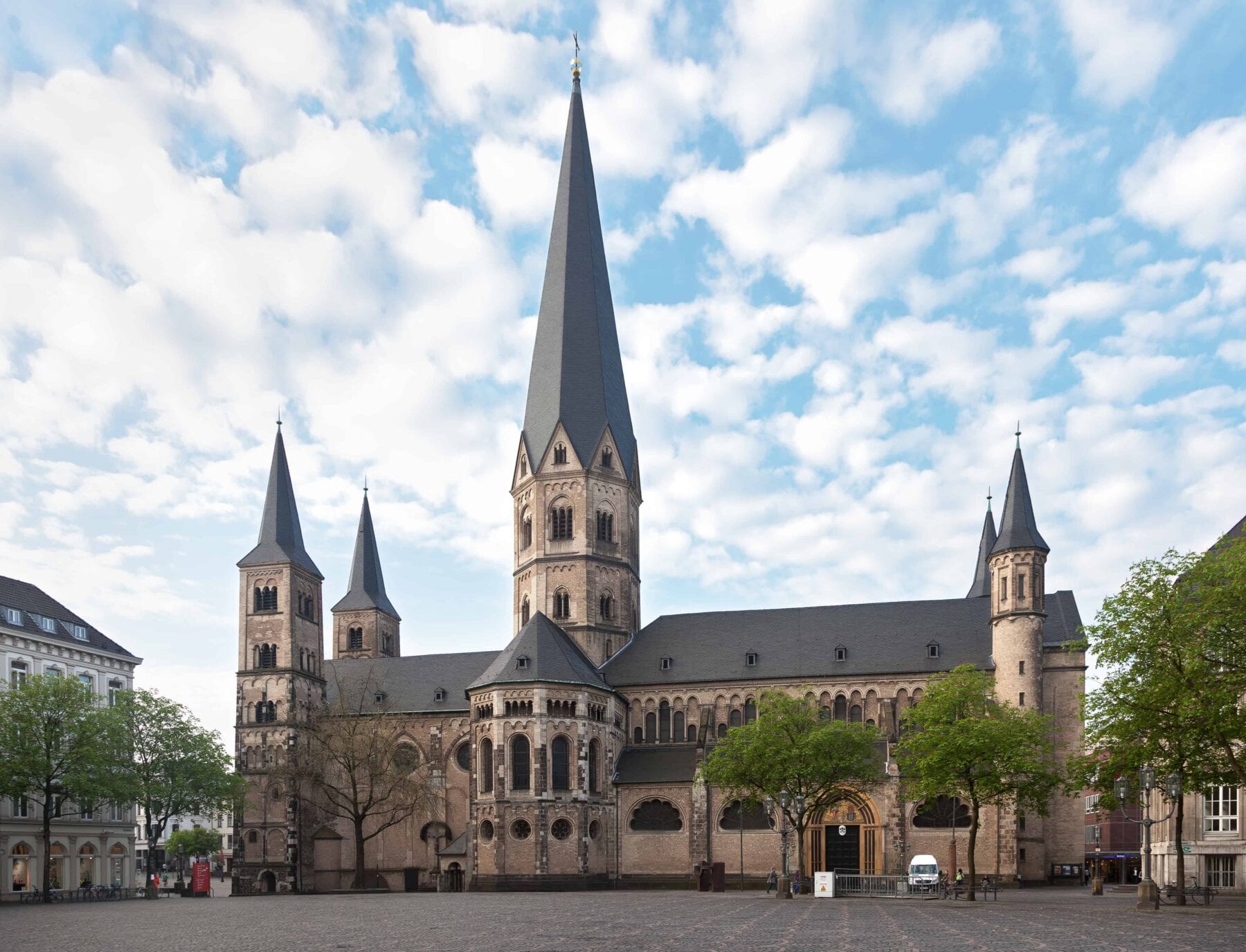 You may be aware until 1990, Bonn was the capital of West Germany. This amazing city has a lot to offer including visiting the Haus der Geschichte museum.

You can learn about German history starting with the end of World War II. Take a trip back to the 1950s at the antique cinema and view the saloon car used by the official railway station for the chancellors until the 1980s.

One of the oldest churches in Germany is the Bonn Minster. The church was built during the eleventh century over the ruins of temples and churches from the Roman times. There are five magnificent towers with Romanesque arched windows. Heinrich Campendonk created the sensational red and blue windows you will find in the apse.

The Town of Königswinter

If you have ever dreamed of stepping into a fairy tale, do not miss Castle Drachenburg in Königswinter. You will find the castle on a wooded hill overlooking Rhineland.

The castle was built between 1882 and 1884 and is considered one of the most significant of the late nineteenth century in Germany. After a restoration so thorough it took years to complete, the lower castle and the grounds have regained their original splendor.

You can visit the reception and living rooms to experience the life of sophistication the lived when the castle was built. Take a stroll through the extensive grounds to enjoy the majestic rhododendrons, ancient trees, and breathtaking views. According to folklore, a dragon was slain by Siegfried higher on the mountain. The castle features a square clock tower, mock battlements and dreamy spires.

Take the time to visit the sleepy town of Königswinter. This is where you will find Heisterbach Abbey, once a Cistercian monastery. According to German history, Walther was a knight living on the Stromberg as a hermit. He built the monastery in 1134 when disciples began settling nearby.

The private villa of Schloss Drachenburg was built during the 19th century by Baron Stephan Sarter although he never lived there. This magnificent villa now belongs to the North Rhine-Westphalia State Foundation and is definitely worth a visit.

Middle Rhine Valley – Might take longer than a day

This one you could consider for 2 days as well. Head to “Middle Rhine Valley” for some incredible nature and lovely wine. This region is world-famous UNESCO heritage site is simply stunning, just have a look on the video above! We recommend taking a cruise boat trip! 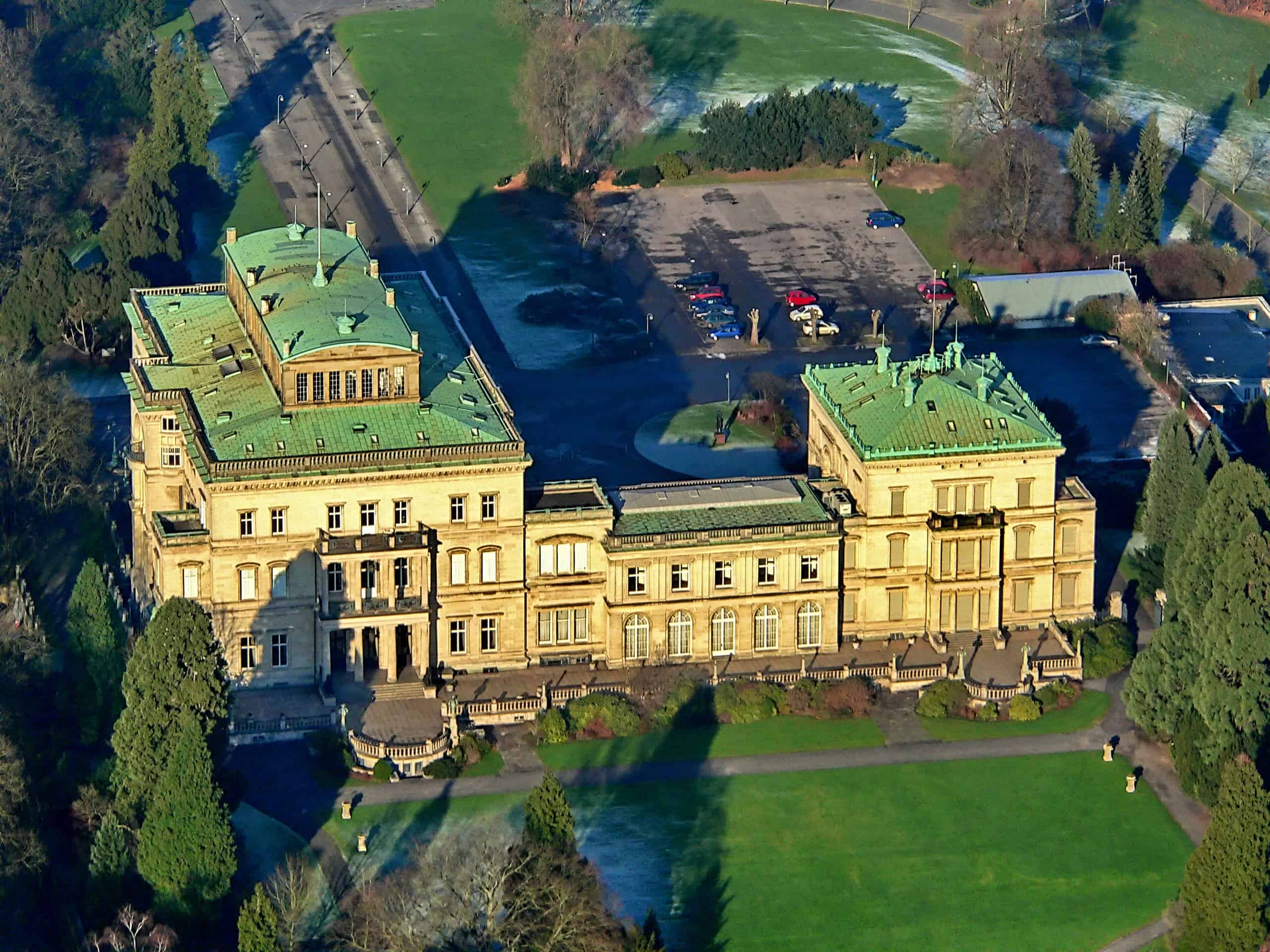 You can find Essen between the Ruhr and Emscher rivers. The city is known for mines and factories, exceptional museums, churches and art galleries. The Museum Folkwang displays important art from the nineteenth and twentieth centuries as well as a collection of European sculptures from the 13th century. You will also enjoy the photographic collection, drawings, and prints.

The Grugapark Botanic Garden is lovely. The area includes the Grugahalle sports complex, surreal old fountains, delicious restaurants, and an observation tower. Hundertwasser House is a delightfully colorful and quirky building designed by Friedensreich Hundertwasser, the renowned architect from Austria.

The plants in the botanic garden include species from the local area, North America and Asia. While in the city, take the family to see the main theater of the city in the Municipal Park, the narrow -gauge railroad, the amusement park, the aquarium and the animal enclosure. The railroad is three and one-half kilometers in length. 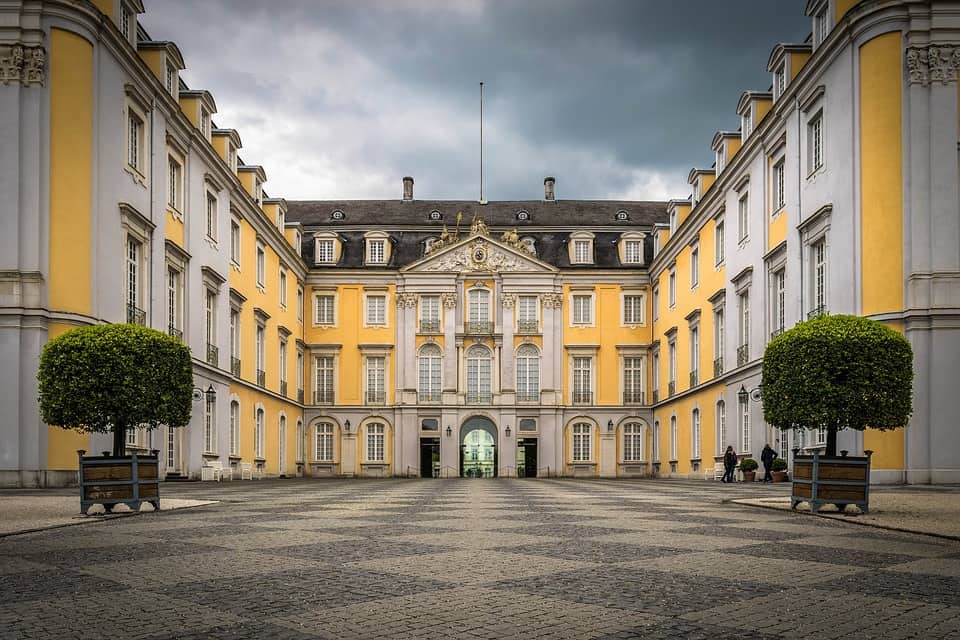 The setting for the castle is an idyllic garden landscape. Johann Conrad Schlaun was the architect who began the project although the castle was completed by François de Cuvilliés. This was the magnificent residence of the archbishops of Cologne. There are three separate wings constructed of brick with cast rendering.

The orangery on the south side has an oratory while the one on the north encompasses numerous service buildings. The castle is a dazzling creation in addition to being an exceptional example of the Rococo style. The staircase is breathtaking with caryatids, jasper columns, stucco, and marble. The frescoed ceiling is absolutely stunning.

The central block, private apartments and the wings of the parade are outstanding. The castle was built in its own little park by Clemens August between 1729 and 1737. This was where he practiced the sport of falconry. There are two floors in the main building styled like a country home in brick. Two single-story rectangular buildings flank the castle.

The rectangular buildings originally housed the falcons although they are currently being used for exhibitions. The oval salon on the ground floor was created with both charm and improvisation. An amazing marine grotto called the Bordelais Laporterie was created for the chapel. The walls are faced using concretions and shells. 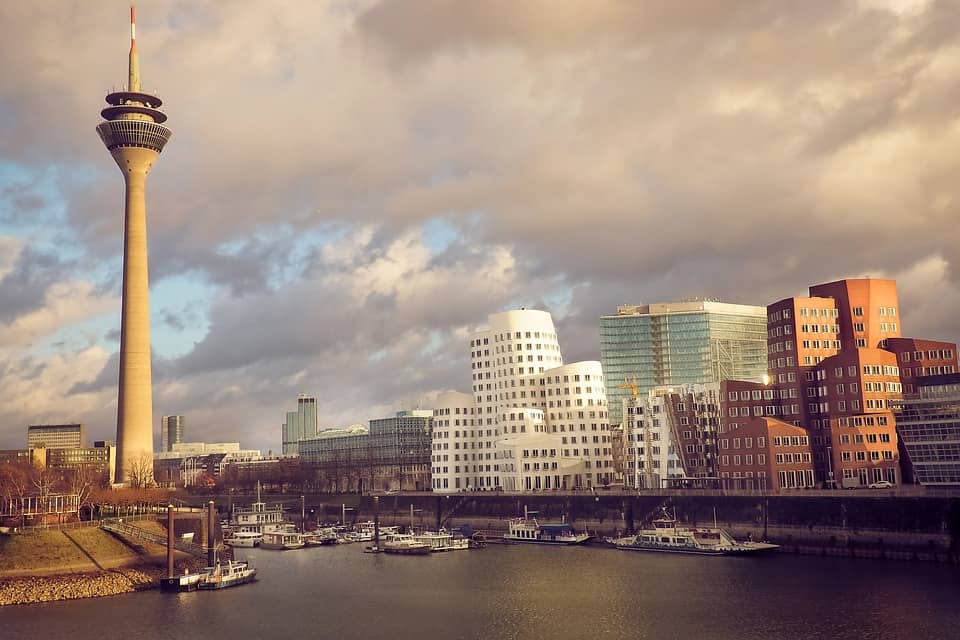 You could spend days in this city exploring the activities and attractions. The Rhine is amazing and the lifeline of the city. The Rhine embankment is peaceful and an ideal location for enjoying the view of the river or taking a stroll. You can take a river cruise or spend some time cycling along the river. The view of the city is stunning.

Spend the day in the Old Town of Altstadt. There are rows of shops, incredible views of the Rhine and the longest bar in the world. You will find both tourists and locals here for some friendly conversation. Marktplatz Square offers historical architecture, sensational museums, and beautiful churches.

To truly experience Dusseldorf, you need to visit the farmer’s markets. There are fresh fruits and vegetables right from the farm, cheese, eggs, poultry and meat. A lot of the markets offer options for lunch or snacks for the perfect afternoon break.

The Rheinturm offers the best of the cityscape of Dusseldorf. The telecommunications tower has an observation deck for incredible views of the city stretching for miles. There is also a revolving restaurant with delicious food and views you do not want to miss. 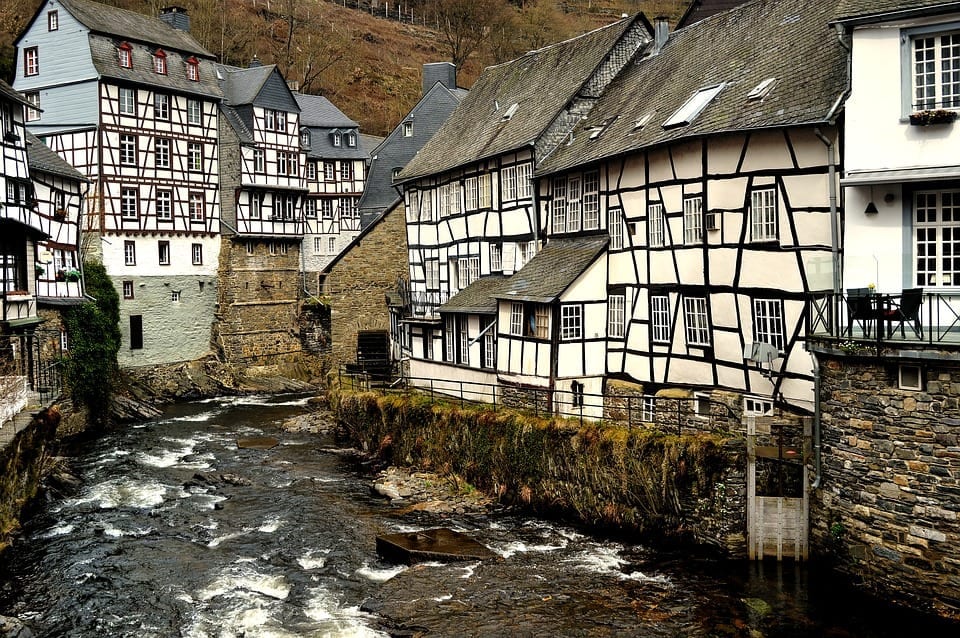 Monschau is one of the most picturesque towns in Germany. The town is up against the border to Belgium on the Rur river. You can experience the thrill of whitewater rafting or take a boat ride. There are guided tours or you can rent your own boat for a delightful afternoon.

The town is filled with flower boxes adorning timber-framed buildings, delicate bridges, cafes and arts, and crafts shops. This is also where you will find the Castle Monschau from the thirteenth century. Portions of the castle are in ruins but the castle is an ideal location for the operas and summer concerts held here.

There are fascinating shops and museums including the Wilhelm Maasen Coffee Roasting Company. Travelers have been watching coffee roasting all the way back to 1862. There are also a Local History and Culture museum, a Printing Museum, a Mustard Mill from the nineteenth century and a glassworks factory for your enjoyment.

The Felsenkeller Brauereri Museum is all about the beer the Monschauer Brew House has been brewing for more than 150 years. Eifel National Park has deep woodlands with excellent hiking trails and a zoo the entire family will enjoy. 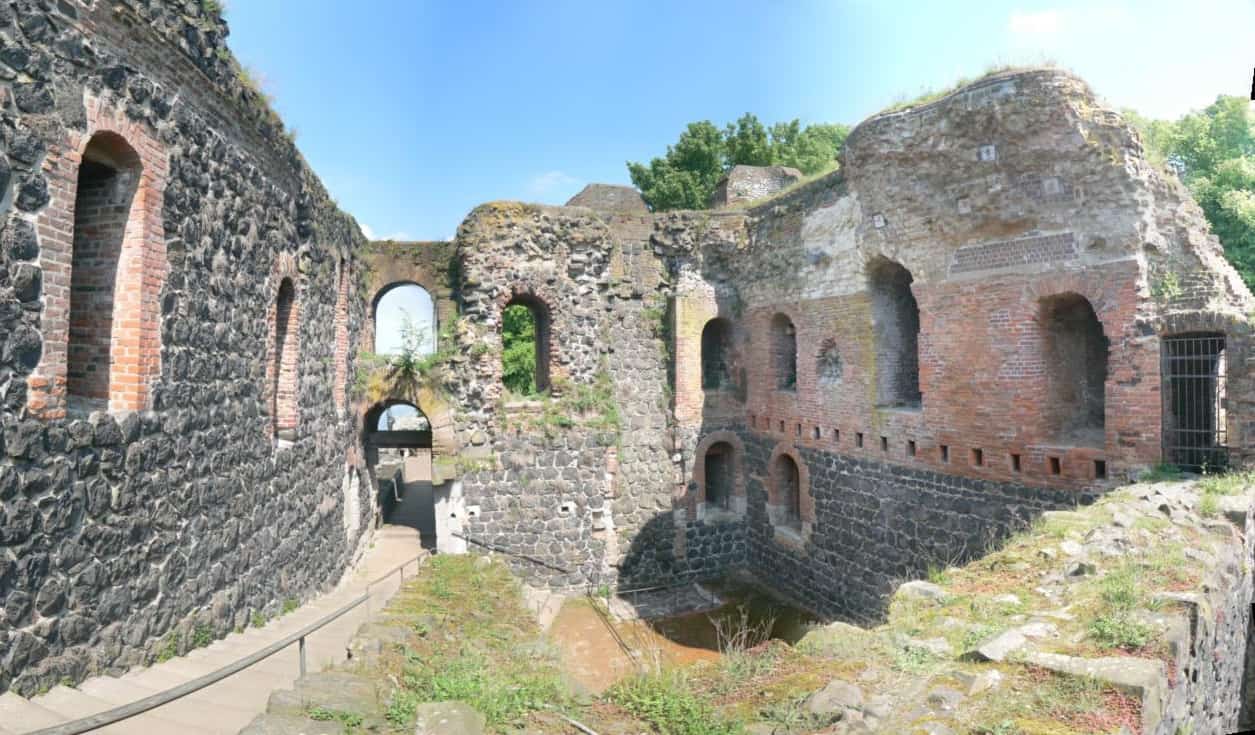 Kaiserpfalz Kaiserswerth is a castle from the twelfth century, definitely, one of the must-do day trips from Cologne. Although the castle is now in ruins, it is still a glorious sight. The castle was finished in 1193. This was where the King was meant to live once the Rhine customs collection was moved from Tiel to Kaiserwerth.

You can explore the fortress located on the river Rhein and climb the stairs to look out of the slits between the old stones. You may even see one of the boats heading down the river. This is one of many authentic castles found throughout Germany. Kaiserpfalz Kaiserswerth represents the best of German history and the magical dreams of childhood combined.

The castle had numerous owners before it eventually fell into disrepair. There is no charge to explore the ruins and imagine the history behind this magnificent castle. The acoustics of the ruins are so good numerous classical concerts are hosted here. 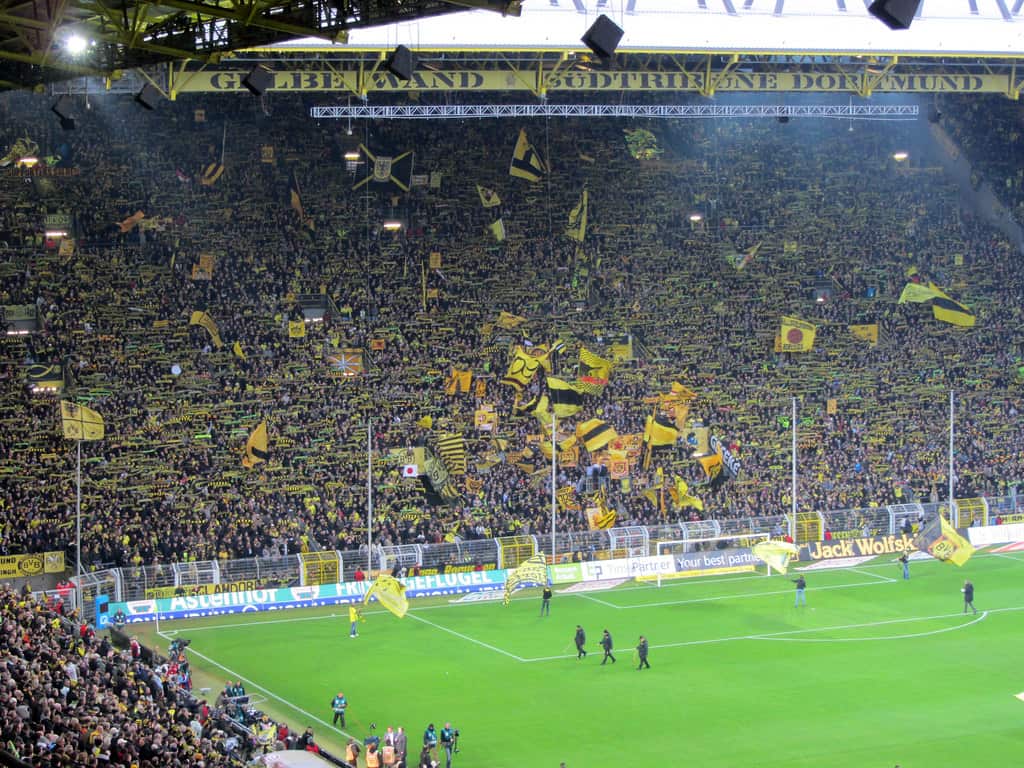 Dortmund is world-famous for its football club “Borussia Dortmund” and great fans! Many amazing stars came out of there and put Dortmund on the map!

You can either check out the football museum but of course, the best would be to score a ticket for the game. Especially, if you get lucky, go see “German El Clasico”. Dortmund vs. Munich. 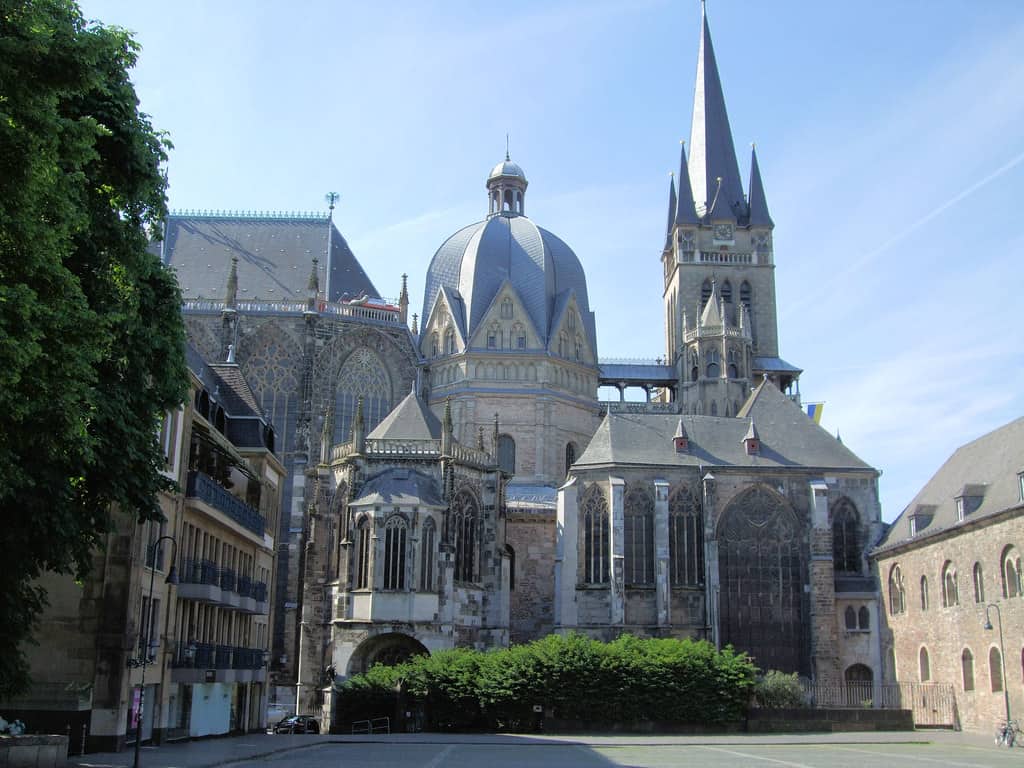 Aachen was chosen by the great Charlemagne as his imperial residence during the ninth century. He was the first of the Holy Roman Emperors with the dream of transforming the city into the new Rome. The Catherdral has magnificent golden shrines including the reliquary holding the bones of Charlemagne.

The cathedral treasury contains an incredible assortment of Medieval riches. You can see so much relating to the previous ruler including the site of his palace, the City Hall and even the place where his Imperial coronation feast took place.

The cathedral treasury is located on the same UNESCO site and contains one of the most valuable Medieval liturgical art collections in Europe. The collection is housed in one of the cathedral cloister buildings. The pieces cover approximately twenty years from Late Antiquity to Gothic.

It is difficult to imagine how the collection of crosses, codices, reliquaries, the golden bust of Charlemagne and holy vessels have survived for so long. There is an ivory hunting horn or an olifant believed to have belonged to Charlemagne. The horn dates back to the 1000s and his hunting knife to the 700s.

The collection is dazzling and captivated Albrecht Dürer, the Renaissance artist when he viewed it nearly 500 years ago. The textile collection is located in the basement including the ceremonial coronation cloak.

Do not miss the Aachen Cathedral. Charlemagne ordered the cathedral to be built during the eighth century as a Palatine chapel. This was where he was buried when he died in 805. A lot of Holy Roman kings had their coronations at this cathedral from 936 until 1531.

We hope you loved this list! We would love to hear some feedback and suggestion in order to improve it. Feel free to submit some ideas for day trips from Cologne that travelers and visitors should not miss out!