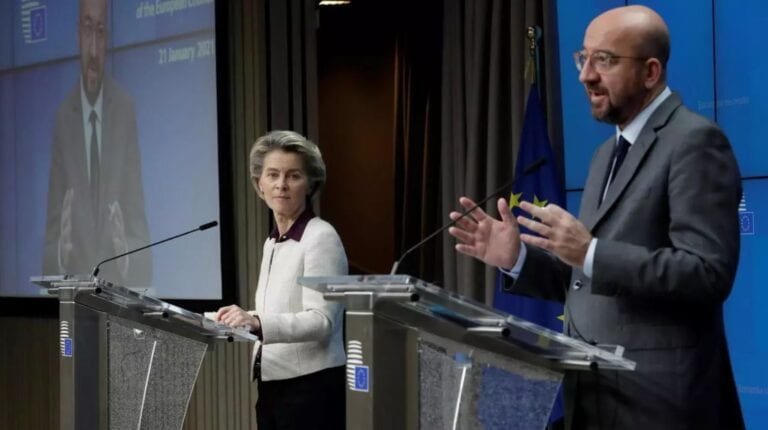 In response, national and EU institution leaders met via a four-hour video summit on Thursday to discuss those concerns and determined that travel must be curtailed.

Ursula von der Leyen, the president of the European Commission, told a media conference held that evening that non-essential travel will now be “strongly discouraged” throughout Europe, not only across borders but domestically. “Additional restrictive measures” will likely be necessary to ensure that this occurs, according to Charles Michel, the president of the European Council.

However, both added that the closing of national borders as happened in March, when the COVID-19 virus initially spread across Europe in significant numbers, must be avoided.

Von der Leyen said that it is “absolutely important to keep the single market functioning” so as to avoid economic chaos.

The COVID-19 variants that have concerned leaders in Europe and throughout the world were initially detected in the United Kingdom, South Africa and Brazil.

One example of how quickly one of these variants has already spread within an EU country can be found in Portugal. Prime Minister Antonio Costa announced on Thursday that 20% of its new cases involve the British variant.

The corresponding percentage a week ago was 8 while he expects it to reach as high as 60 in the coming weeks.

As a result, all Portuguese schools have been closed. This follows the imposing of lockdown restrictions six days earlier that included the closure of non-essential services and the limiting of shopping hours. Residents were also strongly encouraged to remain home whenever possible.

Other countries have implemented tight restrictions as well. France has a curfew in place from 6 p.m. to 6 a.m., which was extended from 8 p.m. to 6 a.m. on Saturday. French restaurants and theatres are closed. The Netherlands is introducing a curfew from 9 p.m. to 4:30 a.m. on Saturday night. Germany does not have a national curfew, but non-essential businesses, such as restaurants, are closed.

As a result of the worsening situation across Europe, a dark red category may soon be added to the COVID-19 map of EU countries. Currently, the color for “high risk” is red, but that now encompasses much of the continent and does not communicate the significant differences that are occurring between red countries.