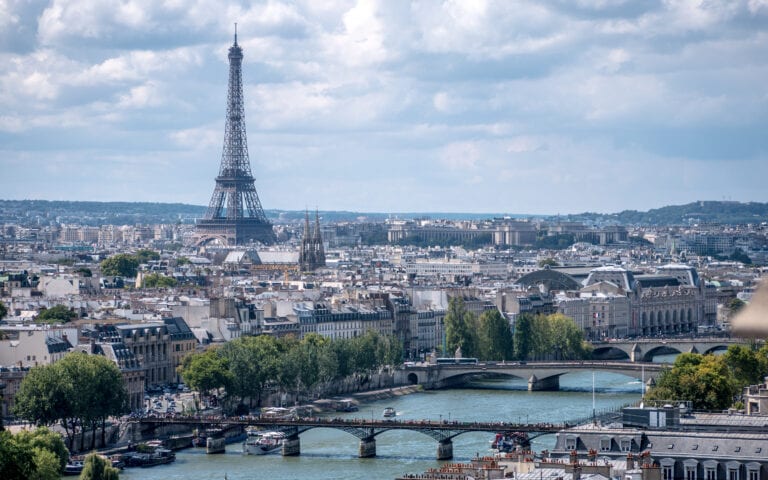 France is open to tourists from most countries. Different rules apply to green, orange, and red-listed nations.

Fully vaccinated travelers from EU or “green” countries can enter without submitting a negative Covid-19 PCR test or going into quarantine.

Check out: Best Hostels in Paris if you’re are traveling on the budget

The French President has confirmed that fully vaccinated visitors from European Union Member States will be able to enter France without pre-departure testing or any other additional requirements.

“Faced with variants of the virus, we must continue to act like Europeans. People who have been vaccinated will not have to take any tests to travel between member countries of the European Union,” Macron wrote on his official Twitter account Thursday.

However, France has restricted all travel from the U.K. due to the high Omicron activity in its territory.

Residents from the E.U., and the Schengen area, plus other non-European nations are allowed entry for any reason including tourism. (Updated – December 21).

Only travel for essential reasons is allowed. A negative PCR test and a 14-day quarantine are mandatory.

Countries where the circulation of the virus is particularly active and/or a variant is likely to present a risk of increased transmissibility or immune escape.

Countries that do not appear on the green or orange lists belong on the orange one.

Are there any specific rules for French Overseas Territories?

The specific rules for overseas territories are available at the following websites:

How can non-EU visitors assess if their travel is essential?

For individuals needing to travel to France but whose passport belongs to one of the restricted countries, there is the possibility to be admitted under one of these categories.

Are there additional requirements for foreign nationals coming from a restricted country?

Is it safe to visit France now?

France has been placed as a “Level 4: Very High Level of COVID-19” by the CDC.gov due to its high infectious rate and it is not safe to visit at the moment.

November 7 – France might reintroduce some COVID restrictions on Nov. 9

The French President will address the nation on Tuesday about the surge in COVID-19 cases and other issues, announced the government.

The last major televised speech was on 12 July at the start of the fourth wave of infections. On that occasion, he made vaccinations mandatory for all front-line workers.

“The epidemic is picking up speed again in Europe, Europe has again become the epicenter of the epidemic,” government spokesman Gabriel Attal told reporters.

On Wednesday, the government reimposed the face masks mandate for school children in 39 regional departments where infection starting to get out of control.

The French government will no longer sponsor the so-called “comfort” tests needed for people who want to travel but who do not show any Covid-19 related symptoms, announced Primer Minister on Sunday.

The decision will enter into force on October 15. On that day, travelers will have to pay €49 for a PCR test and €29 for the antigen one.

France is looking to extend its COVID state of emergency until summer 2022, so the government can keep enforcing this and other restrictions.

President Emmanuel Macron announced on Friday that the number of French residents who have received at least one shot of a Covid-19 vaccine has surpassed 50 million.

Macron made the announcement in a video shared on his official Twitter account saying, “the vaccine saves lives, the virus kills, it’s that simple.”

The country of 67.06 million inhabitants now has one of the world’s highest vaccination rates, with close to 90% of its eligible population fully or partially vaccinated.

Seven weeks after the implementation of France’s “Health Pass”, the vaccination rate has increased faster than expected.

Since mid-July, millions have scheduled their vaccination appointments to avoid taking a Covid-19 test every time they want to go for lunch.

“People have understood it, it’s relatively well respected and it’s contributing undeniably in keeping the fourth wave in check for the moment,” said Djillali Annane, the head of the care unit of the Raymond-Poincare de Garches hospital in Paris.

On July 21, France made it obligatory to show the “Passe Sanitaire” (health pass) for people to visit France’s famed restaurants, cafes, outdoor terraces as well as to use public transportation and more.

The pass must contain proof of being fully vaccinated or having tested negative for COVID-19.

On August 19, Prime Minister Jean Castex announced the government had managed to vaccinate almost 60% of its eligible population.

Although this is a great milestone, it’s not enough to ensure French people, especially those under 30’s can have their lives back.

This is probably because most of them have not been able to access the vaccine yet.

The restrictions may include closing restaurants and bars earlier and mandatory use of face masks, once again.

On Thursday, the highest constitutional authority in France ruled in favor of using a COVID-19 “health pass” for people to be permitted to enter public spaces such as restaurants and shops.

“No freedom is absolute,” said President Emmanuel Macron on Instagram defending the implementation of the health pass.

Effective July 21, tourists and locals will need to bring their “health pass” (pass sanitaire) if they want to access restaurants, bars, cinemas, museums, as well as to board trains and airplanes.

Right after the announcement, more than a million French people scheduled a vaccination appointment on the medical website Doctolib according to the company’s CEO on Twitter.

“I can understand that the French were worried, that they had doubts,” said government spokesperson Gabriel Attal, “but I tell them very sincerely and very honestly: the time is not for doubting the vaccine, we now have to go for it.”

Those who chose not to get vaccinated must present a negative COVID-19 test every time they want to go to the aforementioned places.

July 4 – France reopened for tourism to the U.S and other 26 territories from the end of June

France reopened its borders to Americans and other tourists from the end of June. To be allowed entry, fully vaccinated visitors must have received one of the EU-approved vaccines.

Travelers who opted for vaccines different from these will still need to prove their compelling reasons to travel to France.

The government has recently moved the United States to its “green list” of countries. So for now U.S. visitors are allowed entry regardless of vaccination status. However, this may change with little to no prior notice.

France reopened for international tourism on June 9 removing the need for coronavirus tests for vaccinated Europeans. Allowed countries will be updated on a weekly basis depending on the epidemiology situation of each territory.

The new color-code system informs travelers the type of restrictions they will face upon arrival and also the ones that have been lifted.

France is currently discussing the possibility of relaxing multiple COVID-19 related restrictions on June 23 and on July 9.