Is It Safe To Travel To MEXICO Right Now? (2022 Safety Update) 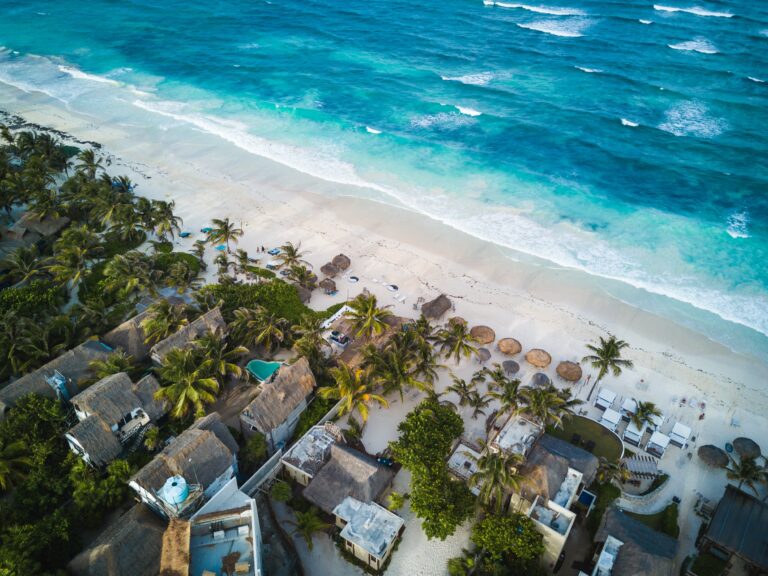 Mexican marines have been deployed to Cancun beaches including but not limited to Playa del Carmen and Tulum to keep the area safe during the spring break season.

The decision was made in response to a series of shootings that have claimed the lives of a number of tourists in the last three months.

In some cases, the victims were involved in criminal activity in the area, in other cases they were just passing through.

Related: Is it safe to travel to Cancun right now?

How dangerous is Mexico for tourists right now?

The US Department has recently warned citizens against traveling to Baja California, Tijuana, Colima, Guerrero, Michoacan, Sinaloa and Tamaulipas, due to increasing criminal activity. Americans and other foreign visitors, as well as local hospitality employees, have lost their lives in different attacks in the last few months.

If you still decide to head up to Mexico, please make sure to follow most of the following recommendations.

Also read: US Issues Alert Against Traveling To Cancun As Violence Is On The Rise

Quintana Roo Tourist Board has developed the Guest Assist app for free download.

The app provides safety information, legal advice, a complaint line, and coronavirus information as well as  access to a 24/7 bilingual call center for visitor assistance.

The app includes links and services for emergencies, extortion and kidnapping, robbery, lost or stolen passports, roadside assistance and even a way to file complaints for local tourism service providers.

“Ongoing security and protection strategy in place, and … is continuing communications with the State Police, alongside federal and local agencies and the private sector to maintain updated security measures to keep a safe and enjoyable environment for residents and visitors.” said the Director of the State Tourism Board.

The US State Department changes national warnings to specific states

While the State Department normally issues a Level 1 to 4 warning for each country in the world based on concern for the overall safety for travelers, the travel advisory for Mexico changed to specific states on May 2.

The change for Mexico warnings is a result of the State Department moving away from Covid-19 concerns, which is also the focus of warnings from the US Centers for Disease Control and Prevention (CDC).

“The Department of State’s goal is that U.S. citizens planning travel to Mexico focus on the particular area of ​​​​Mexico to which they will be traveling,” they said.

Quintana Roo residents and tourists are being urged to take protective measures against Hurricane Ian’s ferocious rains and powerful wind gusts. The dangerous tropical storm has intensified to hurricane category 3.

Heavy winds and rain are affecting a number of Quintana Roo tourist hotspots, including Cancun and Playa del Carmen. Although, the hurricane won’t make landfall in these areas, tourists and locals should still look to local authorities for preventive safety measures.

Tourists do not have to cancel their flights to Mexico but putting them off until next week is advised.

Is it safe to drive to Rosarito?

Not for the moment. Traveling to Tijuana and Rosarito, Baja California, poses a “serious risk,” according to US officials. Following the arrest of a key cartel boss, the US Embassy in Mexico has advised American tourists to avoid Tijana, Rosarito, and Baja California due to serious safety concerns.

Is it safe to drive to Ensenada?

Ensenada is generally a quiet and safe city. The risk of crime is low and travelers can feel safe here. Citizens have a high level of trust in the police.

Is it safe to travel to Cancun right now?

Cancun is considered relatively safe to travel but due to multiple recent shootings between local gangs in the area, there are warnings about travel to the area.

Best places to visit in Mexico in COVID times

Whether you are interested in spending your vacation at the sunny beach, trying new watersports, or just enjoying the cultural experience, Mexico has something to offer to everyone.

However, before booking your trip, you must consider reviewing the Mexican States that have made it to the orange, yellow, and green epidemiology lists. Aim for the yellow, and Green although orange ones can offer you plenty of fun too.

Hotspots to visit this summer in Mexico

1. Cancun and the Mayan Riviera

Blessed with sugar-white beaches and countless high-end resorts, Cancun, Playa del Carmen, the island of Cozumel, and beyond compose a magnificent area along the eastern edge of the Yucatán Peninsula. It’s a must-see for international travelers.

Featuring luxurious spas, golf courses, and beautiful beaches, Cabo San Lucas is one of the luxury hotspot destinations in Mexico. This does not mean that people traveling on a budget will not enjoy it. The city offers all types of activities from swimming to diving, snorkeling, and fishing.

September 7 – Los Cabos, ranked as the safest destination in Mexico

According to a recent official research, Los Cabos, Cabo San Lucas, and San Jose del Cabo are the safest destinations in Mexico.

San Lucas and San Jose are on track to become the new Cancun, with arrival numbers above 2019 levels and accounting for more than 8% of all air traffic in Mexico.

The classification of Los Cabos, Cancun, and several other Mexican beach towns as Level 2 destinations only means visitors should proceed with caution.

Quintana Roo authorities have sent undercover police officers to the Tulum Hotel Zone following an upsurge in violence in the area in recent weeks.

Oscar Montes de Oca Rosales, the attorney general of Quintana Roo, has indicated that the undercover police officers are intended to help restore peace in the city.

The decision to increase police presence in the Tulum hotel zone was made a week ago during a closed-door meeting between three levels of the state government and the armed forces.

On Aug. 12, four dead bodies were discovered in the hotel zone, prompting the actions. Five people were arrested as suspects in the murders.

A man was tragically shot on a beach at the Riu Dunamar resort. Some tourists were shocked to witness such an event, but no one else was injured.

It is not known what caused the incident or why the shooting occurred. The identity or other specific information is also unknown. The horrific incident occurred on Costa Mujeres beach, a small piece of land with beautiful sandy beaches north of downtown Cancun.

“It was meant to be a holiday of a lifetime but it turned into absolute hell. I’ve now got a 14-year-old boy who is struggling to sleep because he’s still so terrified that it could’ve been him or us that got shot,” said Tracey Campbell one of the witnesses.

On Monday morning, a gunshot occurred on Fifth Avenue in Playa Del Carmen.

According to reports from the Solidaridad municipal police, the shots were fired between Calle 1 and Calle 14, on the famous Fifth Avenue. The first three people were reported injured but they are currently stable.

Following the report, the security authorities arrested seven Mexican individuals, and seized three firearms and 31 small bags of marijuana, according to the Secretary of Security of the municipality of Solidaridad, where the famous tourist center is located.

Some days ago, prosecutors and police said the remains of two Canadians were found in an apartment in the Mexican resort town of Playa del Carmen, with their necks slashed.

According to the prosecutor’s office, a security guard at the tourist apartment complex in the city center was also injured.

Investigators found an identification card of the male victim with three different names in the apartment where the remains were discovered. Authorities further stated that the person was wanted worldwide for fraud.

Investigators have not yet determined if the victims were long-term residents or visitors, although they are believed to have been in the area for several months.

March – Violence continues on the rise on Cancun resorts

Robert Almonte, a retired deputy chief of the El Paso Police Department and former U.S. marshal for the Western District of Texas who is an expert on Mexican drug cartels, said that tourist resorts in Cancun are currently a war zone.

“It is not safe to go to the resorts right now.”

Almonte does not believe that visitors would be targeted directly, but he is concerned that they may become collateral damage.

“The cartels are not very careful about how they kill,” he said. “They just go in and spray bullets and if an innocent person gets killed, that’s collateral damage and the cartels don’t lose sleep over that.”

Aguascalientes is now the only “red” state, which means that hotels can only accommodate visitors who are engaged in “critical activities.”

The rest of the states are “green,” so all activities are permitted.

As of yesterday, January 14, Jalisco restaurants, bars, clubs, concert halls, and other venues require their customers to provide proof of vaccination or negative COVID-19 test.

Two other Mexican regions followed the suit, including Tlaxcala and Baja California. However, in the State of Baja California, the proof of vaccination is rather a recommendation than a requirement.

For more information, check our full article on the topic here.

19 months into the pandemic and the U.S. is finally reopening the border with Mexico for vaccinated tourists.

Non-citizen passengers should have their proof of vaccination ready. They should also be prepared to verbally state their reason for travel and vaccination status while boarding.

Vaccines approved by the CDC are Pfizer/BioNTech, Moderna, and Johnson & Johnson. Vaccines listed for Emergency Use (EUL) by the World Health Organization will also be accepted.

Unvaccinated visitors who travel for essential reasons will be allowed this time. However, starting in January 2022, all incoming passengers will have to be vaccinated.

On Tuesday, December 7, the first COVID-19 booster shots became available for residents aged 60 and over in Mexico City. They are AstraZeneca doses and are first administered to residents of the southern Tlalpan neighborhood.

To become eligible, patients must have completed their vaccination at least six months ago regardless of the vaccine makers.

Last month, Mexico registered some of the highest numbers of daily COVID-19 incidence since the beginning of the pandemic. Luckily, its third wave seems to be easing.

On the other hand, on September 15, there were 83,834 active cases reported in Mexico, a 1% decrease compared to Tuesday, September 14.

The same day, Deputy Health Minister Hugo López-Gatell said at a morning press conference that the third wave was on the wane in all 32 states.

He also mentioned that most current cases were mild thanks to the high vaccination rate.

On September 3, Mexico will start vaccinating the 18 to 29 age group in five of its municipalities.

In Cuautitlán Izcalli, Cuautitlán, Huixquilucan, Metepec, and Zinacantepec, youngsters will be able to get their first dose from September 3 to September 7.

Also, pregnant women will have a chance to get their jab after their first trimester in the above mentioned municipalities.

To prevent people from waiting in front of the vaccination centers, local government officials stressed out again that vaccines are free and that everyone will get the jab in the following weeks.

The United States will send Mexico 8.5 million more doses of COVID-19 vaccines as the delta variant spreads like wildfire across all Mexican states.

On Tuesday, Mexican Federal health authorities reported another 7,172 new Covid-19 as the third wave of the coronavirus gathers pace.

President Andrés Manuel López Obrador has come under fire for its lack of action to contain the virus.