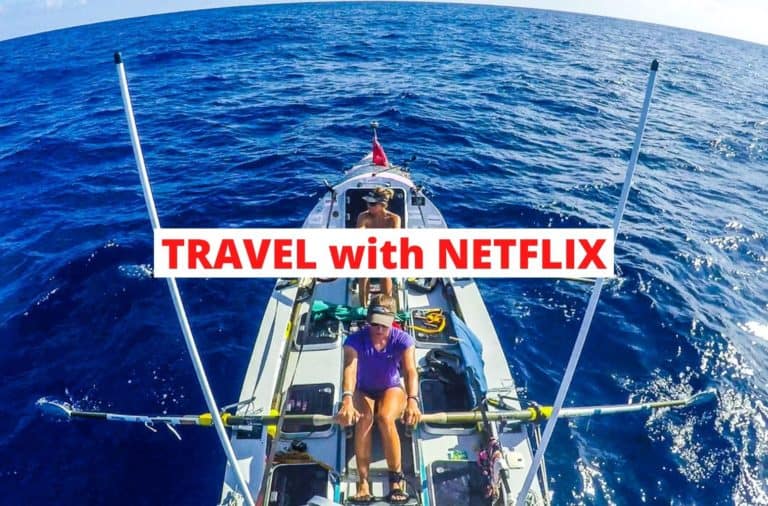 If you are looking for a new travel documentary to watch, then you should check out these 12 highly rated Netflix travel documentaries. Each has its unique twist on travel destinations allowing you to discover the natural beauty and diversity on earth.

You will get to know incredible individuals & solo travelers who are dedicated to their dreams, have an adventure in their blood and want to make this planet a better place to live.

Each show will entertain you, but some will challenge you to dig deep inside yourself for answers about what makes life worth living. Traveling through the stories of others is a great way to visit when you cannot physically go to the locations yourself, especially now during and isolation and corona times.

This documentary chronicles the story of the four-women crew who set a world record by 8,446 miles across the Pacific from America to Australia.

The journey that occurred in three stages does not have the same women throughout the entire trip with women leaving and others joining in Hawaii and Samoa. A small camera on their boat records the journey and the women’s reaction to it.

You will feel the woman’s dire straits at times as they each take turns rowing the boat regardless of how they feel about their situation at the moment. Even when they are sick, tired, thirsty, or hungry, they know that they must take their turn.

Many of the most powerful moments of this documentary show the women standing in front of the camera and sharing what is on their hearts through days of victory and days of utter defeat.

Explore diverse locations around the world to explore local cuisine and the various stories behind those creations. Host Phil Rosenthal has real respect for the people that he encounters along the way, like the people serving crawfish in New Orleans, Lisbon chefs preparing pasteis de nata, and ribs in Buenos Aries. While some of the food is not what appears on most Western dinner tables, Phil approaches each with a willingness to try new things.

Along the way, you will experience Phil’s great sense of humor that you may already be familiar with from his work on The Simpsons, Everybody Loves Raymond, and other popular televisions shows. If you are a foodie, then this documentary is must-watch television.

Everyone is likely to love the humor that is found in this documentary, and the people that you will meet along Phil’s travels.

Each of the documentaries in the Dark Tourist series is loosely tied together in one geographical area. Host David Farrier takes you to little known locations that have an unusual twist.

For example, in Japan, you will be taken to swim in a lake formed by a nuclear explosion. This documentary keeps things moving at a rapid pace because you only visit each location for about 15 minutes. Farrier, who broke into the documentary scene with Tickled, adds his unique sense of humor to each episode.

Many of the episodes will leave you thinking about questions posed about what ties people together as humans. You are likely to love the news documentary style that journalist David Farrier brings to many locations around the world that are probably not on your travel itinerary at the moment.

Travel with late-night host Conan O’Brien as he visits diverse locations around the world, like Cuba, Mexico, Haiti, Germany, and Italy. While the first couple of episodes in this travel documentary contain a lot of Conan’s humor, the rest are very orientated to helping you explore what makes each destination unique.

This lighthearted travel documentary will keep you entertained as Conan participates in different cultural activities. As Conan laughs at himself, you are very likely to experience your happy memories.

This fantastic story chronicles the friendship of climbers Tommy Caldwell and Kevin Jorgeson as they attempt to scale the 3,000-foot Dawn Wall in Yosemite National Park. While this story was widely covered in the media, this documentary takes you behind the scenes as the pair spends weeks climbing the sheer wall that has never been climbed before.

You may find yourself challenged by this documentary just like Caldwell is as the duo nears the end of their climb by the challenge of meeting their goal or by friendship as near disaster strikes the climb that they took over six years to plan.

This travel documentary that is also an excellent sports documentary has a broken love story, obsession, friendship, and dedication to meet a goal. Watch to see the thrilling ending of this documentary that will make you wonder if this story is real or Hollywood make-believe.

Join Felix Starck’s 365-day bike ride across 22 countries when you watch this documentary. The cinematography in this travel documentary is breathtaking as you see a very-well edited, vacation-like photos from each location.

You will experience the struggles of riding in a hard rain, dealing with a broken bike spoke and other frustrations of attempting this journey lasting almost 5,000 miles on three different continents. If you love seeing beautiful scenery without needing to follow an emotional storyline, then this documentary is for you.

Along the way, you may find yourself cheering at the high points and getting depressed at the low ones. In the end, John receives the gift of realizing the most critical thing in the world is found right in his own neighborhood.

Director Jennifer Peedom takes you soaring to new heights around the world, without disclosing the exact destination, to show you life on the highest peaks on earth. Mountain climber Renan Ozturk, who you may already be familiar with from Meru and the Last Honey Hunter, shoots most of the footage in this travel documentary that opens near the summit of El Potrero Chico in Mexico.

You will find yourself challenged to examine the role that consumerism plays in the lives of people living in remote mountain communities and on the landscape itself. This documentary set to classical music is loosely based on Robert Macfarlane’s book Mountains of the Mind. Without being preachy, you may come away from this travel documentary, wondering what your travel footprint should be and if you need to change the way that you travel.

Join Felix Starck, his musician girlfriend, and their Bernese mountain dog as they travel from Alaska to Mexico on their converted school bus following the Pacific Coast Highway for much of their trip. You will be thrilled by the soundtrack on this travel documentary as most of it was written by the girlfriend as she saw the beautiful scenery along the way.

After watching this travel documentary, you may even find yourself challenged to create an art project based on the fantastic scenery in this show. As the young couple from Germany experience frustrations with the bus breaking down and other travel problems, you will love this couple’s optimistic outlook on life along with the way that they think outside the box to solve issues, and you will find inspiration to face challenges confronting you. Chances are extreme, you will come away from watching this show with a more optimistic attitude and ready to make the world a better place.

Celebrate street foods from around the world along with the people who prepare and sell them by watching this travel documentary.

You will visit diverse locations from around the world and meet people who will inspire you. For instance, in this travel documentary’s first episode, you will be introduced to Bangkok’s Jay Fai who lost everything in a fire, so she taught herself to cook to raise money to meet her needs.

In the process, Jay Fai becomes a Michelin-star chef. This is just one of the many people you will encounter when you watch this travel documentary series. As you watch this documentary, you may find new inspiration to overcome issues in your own life and accomplish goals that you may currently see as unrealistic.


Leon Logothetis travels around the world on a motorbike or in a Volkswagen Beetle connecting with real people in diverse locations. He relies on others for shelter, gas, and other needs. The only rule is that he cannot accept money.

In exchange, he lets them tell their stories, and you are privileged to watch them in this heartwarming travel documentary. In exchange for the kindness that others have shown him, Leon, who is a former stockbroker, has spent over $200,000 of his own money on doing kind deeds, including building a school in Peru, feeding stray dogs in Ecuador, and feeding orphans in Costa Rica.

Breathtaking scenery is found in each of these documentaries, but you will also find yourself challenged to consider the importance of protecting natural environments in the 21st century.

Produced as the national parks celebrated their 100 birthday, this documentary is like a gift from Redford to American citizens who may never get to see the immense beauty of these parks for themselves.

This travel documentary opens with a depressed John Freeman wandering Phillips College’s campus feeling like life is not worth living. He is despondent that life seems to have no meaning, except for the pursuit of money.

He gives himself 12 months to travel to the Amazon jungle to seek out the meaning of life. While John hopes to find the healing effects of the ayahuasca plant, he discovers that money drives many who have access to the plant. He finally gets the plant from a shaman who is shunned by an NGO that plans to sell the ayahuasca plant.

Since we can not travel, let’s watch these Netflix travel documentaries, and enjoy exploring the world virtually. Find yourself challenged in many of your beliefs while seeing immense beauty. Meet people from around the world and hear their incredible stories of hard work and determination. After watching these 12 travel documentaries, do not be surprised if your life is changed in a good way forever, even if you never leave your couch.