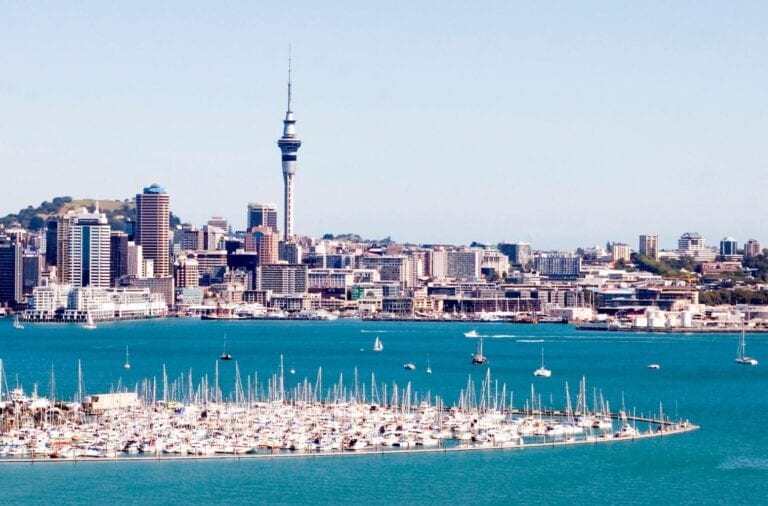 New Zealand Plans to Start Reopening for Tourism from February 27

New Zealand will start reopening its international borders on Feb. 27, 2022.

Suggested: Safest countries in the world to visit in 2021 (According to CDC)

The government expects to resume the reopening as soon as a significant number of the population has gotten a booster vaccine.

On Tuesday, demonstrators blocked streets of the capital with trucks, cars, and motorcycles and set camps outside parliament.

Some 120 people were arrested in New Zealand only on Thursday, as police dispersed the protest against COVID-19 vaccine measures outside the parliament building in Wellington.

On Friday, New Zealand deployed extra police officers to put an end to the fourth day of anti-vaccine protests.

“It must take a toll on politicians, [that] more and more people seem to be feeling comfortable about [threating their lives] which just a few years ago you almost never heard,” said Chris Wilson is a senior lecturer in politics and international relations at the University of Auckland.

Who can enter New Zealand now?

New Zealand is only allowing tourists from Australia and the Cook Islands. Other people permitted to enter the country, either by air or sea, are those who belong in the following categories:

For those who enter the country, a Covid-19 test is mandated as is a 14-day quarantine.

Unless they belong to one of the categories above, U.S. citizens are not allowed entry into New Zealand.

Is it safe to visit New Zealand?

New Zealand is one of the safest places to visit during COVID-19 due to its low infection rates. (CDC.gov).

Why do tourists love New Zealand?

New Zealand is home to plant and animal species, such as the kiwi, that can be found nowhere else. This small, flightless bird has become New Zealand’s national symbol and the friendly natives also often call themselves Kiwis. There are also unique plants such as the ancient, towering kauri trees and the nikau palms.

The country has an inviting camper culture for those who want to set out and explore all of these natural wonders on their own. The roads are well marked and towns all have information centers to advise tourists. There is also a bus network if you don’t want to drive.

There is ample opportunity for outdoor adventure as well. Bungee jumping was invented here and there are many locations where adventurers can give it a try, as well as places to go surfing, skiing, kayaking, and sailing. Visitors can take a hot-air balloon ride over Hobbiton, where the Lord of the Rings was filmed, or explore mammoth caves, as well.

Travelers can also check out the distinctive Maori culture, or try some world-class wine. Because the country is so sparsely populated, it has a very friendly, small-town feel once you leave Auckland, which is the largest city, and the best place to find diversity. Fans of ethnic restaurants will definitely want to spend some time there.

New Zealand has taken halting the spread of the coronavirus seriously. Because of its strict measures, the country is now operating as normal, for the most part.

However, the government remains vigilant so that, for the time being, travel into this island nation is severely limited. When it does open up, however, it provides much to attract those who love adventure, nature, and distinctive culture.

From Feb. 27, fully vaccinated New Zealanders and other approved Australian travelers will be able to enter New Zealand.

In addition, fully vaccinated critical and skilled workers from all nations will be able to enter New Zealand beginning Mar. 13.

From Apr. 12, 5,000 foreign students and other eligible temporary visa holders will also be permitted entry.

The working holiday program will also be reinstated.

“Families and friends need to reunite. Our businesses need skills to grow. Exporters need to travel to make new connections,” said the government.

The massive spread of the new highly-contagious Omicron variant worldwide has forced the government to postpone its reopening plans until at least February-end.

Now that 90 percent of the population has been fully vaccinated, the country expects to “buy time” for citizens to get booster shots.

To do this, the country has shortened the time between the second jab and the booster vaccine from 6 to 4 months.

Regarding other entry restrictions, New Zealand has reduced pre-departure testing from 72 hours to 48 hours.

New Zealand has ended its 107-day lockdown and entered a phase in which no more lockdowns will be imposed. However, all citizens will have to be fully vaccinated to access most of the country’s services.

With about 87% of people aged 12 and over fully vaccinated, the government believes it’s time to abandon its zero-tolerance strategy.

The country has banned all travel from South Africa, Namibia, Zimbabwe, Botswana, Lesotho, Eswatini, Seychelles, Malawi and Mozambique, and trusts its quarantine system to detect any case at the border before being imported to the country.

Auckland Airport’s CEO Adrian Littlewood has urged the government to set a reopening date and “commit now” to allowing fully-vaccinated passengers into the country without quarantine or testing.

According to Littlewood, fully immunized New Zealanders should be allowed to return for Christmas and enter home quarantine, rather than being forced to stay in a hotel for two weeks in a government-managed facility.

“The time has come for the grief and inequity caused by these restrictions to end, allowing Kiwis to return, reunite with their families and isolate at home if they are fully vaccinated with pre-departure testing. The Government needs to make this a priority now.”

Vaccinated Australians and resident permit holders from New South Wales, Victoria and the Australian Capital Territory (ACT) will be allowed to enter New Zealand without quarantine once again starting today.

It’s difficult to predict for how long the travel lane will be open since New Zealand has a long history of closing it and opening it with short notice.

“The resumption of quarantine-free travel from New Zealand to Australia is another important marker on our road to recovery,” said tourism minister Dan Tehan on Sunday.

“Just like after 9/11, the border will never be the same after Covid,” she said. “Things can change, but that doesn’t mean we can’t adapt to them in a way that eventually feels normal again,” said the PM.

At some point this month, vaccinated New Zealanders will be allowed to return to the country skipping the 14-day hotel quarantine, which can be now observed at home.

However, Starting Nov. 1, New Zealand will require all non-citizens to be fully vaccinated to allow them to visit the territory. (Exemptions apply).

Read our full post: New Zealand To Require All International Arrivals To Be Vaccinated

“We have made great progress to contain our current outbreak and are working hard to ease restrictions next week. Reopening quarantine-free travel with Australia at this point could put those gains at risk.”

The current Covid-19 outbreak in New Zealand has reached more than 1,000 total cases, but daily infections have started to steadily decrease.

“We’re simply not in a position to fully reopen just yet,” Ms. Ardern said in a forum Thursday.

However, she also said that the nation would test a new individual risk-based model for quarantine-free travel in January 2022.

“When we move we will be careful and deliberate because we want to move with confidence and with as much certainty as possible.”

“In the view of our health officials, there is greater risk now from the Delta variant than there was when we opened the quarantine-free travel arrangement with Australia,” Ms. Ardern said.

As of today, returning Kiwis and Australians who did not seize the opportunity to get back home during “the week-long grace period” will need to go through the Managed Isolation and Quarantine (MIQ) program for two weeks in a government-managed quarantine facility.

Most cities of the country are getting ready to reopen their business on Wednesday right after the country moves from alert level 4 to level 3 on Tuesday.

From Wednesday, cafes, shops, hardware stores and restaurants will be permitted to open for takeaways only.

Kiwis will be able to only visit in-person supermarkets, butchers, fishmongers, greengrocers, gas stations, and pharmacies.

Auckland and Northland will still need to observe stricter restrictions.

COVID-19 Response Minister Chris Hipkins has required New Zealanders to determine if staying in Australia (Victoria) is absolutely necessary for them, giving the possibility that the country “pauses” its travel bubble with Victoria once again.

“If I was them I would be thinking, ‘can I withstand a pause? So if there was a pause to be announced, would that be a massive problem for me?’ If the answer to that question is yes then I would encourage them to be coming home to New Zealand sooner rather than later,” said the minister.

The Minister will make a decision as soon as public health officials, who are currently reviewing the situation in Victoria, give him a situation report.

New Zealand and Australia are reportedly discussing the possible expansion of their existing quarantine-free Trans-Tasman travel arrangement to include a number of Pacific Islands. It would include New Caledonia, Tahiti, Fiji, and Tonga for now.

Prime Ministers Jacinda Ardern and Scott Morrison met in Queenstown last week to join efforts on an Australian trade dispute with China, and also to discuss the future of travel in a post-pandemic world.

“We are very focused on supporting our Pacific family, and the idea of a bubble that goes beyond New Zealand and Australia is a real possibility,” said Morrison to reporters.

What none of the ministers mentioned was the potential date of the travel bubbles launching.

Starting today the one-way travel corridor first opened in January that only benefited Cook Islands citizens, will also be opened to New Zealanders.

The Cook Islands is a nation in the South Pacific made up of 15 islands scattered over a vast area of the Pacific Ocean. So far, the country has reported 0 COVID-19 cases and, subsequently, 0 deaths to the virus.

Being the second biggest Pacific market to Auckland Airport, general manager Scott Tasker, considers this will be a great boost to the Cook Islands economy whose GDP mostly relies on international tourism.

Prime Minister Jacinda Ardern wants to return the favor to the Islands. So, in case of an outbreak, she is likely to immediately repatriate citizens rather than asking them to stay on the islands -as they do with Australia- “to reduce pressure on the Cook Islands and minimize further spread of the virus.”

New Zealand’s Prime Minister has said that the country will need to reach herd immunity levels through vaccination before any foreigners are allowed to visit. Australian neighbors who have similar low contagion levels could be the first to benefit from the measure as they advance on the vaccination of their own population. (Source)