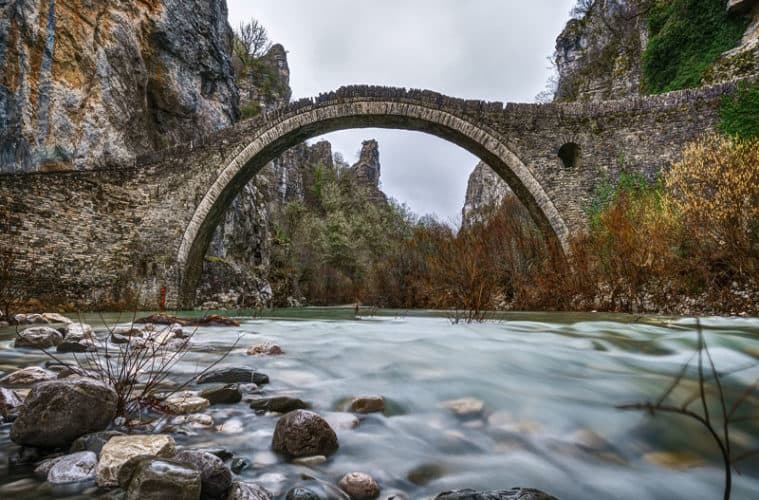 Think of Greece and you’ll probably conjure an image of ancient ruins, paradise islands, and quaint whitewashed villages overlooking turquoise seas. However, away from the main tourist hotspots, Greece holds plenty of hidden charms and offers many unknown gems to explore.

Tucked away in Greece’s northwest corner, close to the border with Albania, Pindus National Park is perhaps Greece’s best-kept secret. With lush, green forests packed with rare plants and animals, craggy peaks that tower over plunging gorges, and picturesque stone villages with their own unique culture, the Pindus National Park is a traveler’s dream.

Despite being one of Greece’s most beautiful natural treasures, the Pindus National Park is perhaps the least visited and least-known national park in the whole of Europe. Visitors to the region tend to head to Meteora, for its colossal rocky plinths and precariously situated monasteries.

However, head a few hours northwest of Meteora and you’ll find yourself in a lush, green paradise. This wild, ancient country boasts natural and cultural attractions galore and is the ideal destination for a relaxing hiking holiday.

Still need a little convincing? Here are our top 7 reasons why Pindus National Park should be on your travel bucket list.

The Pindus National Park is the largest in Greece and covers 2000 square km of pristine hiking territory. If you’re a keen walker, this beautiful corner of Greece is the ideal destination, with dense forest, craggy mountains and deep, plunging gorges.

Even better, Pindus National Park is well equipped for hikers, with well-marked, accessible trails, mountain huts and accommodation for walkers along the way, and friendly local residents. Although wild camping is officially prohibited, it’s also possible to pitch a tent on some routes, provided you leave no trace behind you.

The Pindus National Park is covered with epic hiking trails, with something for everyone, including easy day walks and more challenging multi-day treks. One of the most popular routes is the Pindus Horseshoe, which takes in some of the best sights in the park, including the staggering Vikos Gorge and the beautiful villages of Zagori. However, there are also plenty of shorter routes that pass by pristine, gushing springs, ancient monasteries, and 18th-century mule trails.

In addition to hiking, Pindus National Park offers plenty of opportunities for other adventure sports. The park’s unique geology means that it draws avid climbers throughout the season, who flock to the village of Kipoi to tackle a range of different climbing routes. If you’re looking for other thrills, why not try your hand at canoeing or rafting on the Voidomatis River? Whatever you’re looking for, Pindus National Park has activities to suit all tastes. 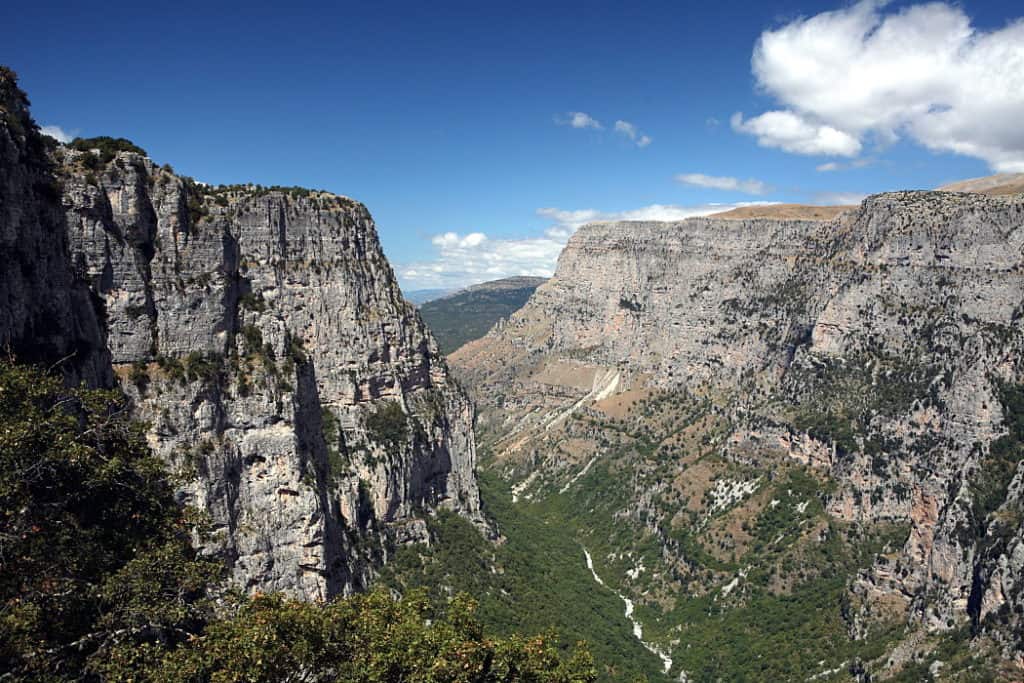 Simply the sight of Vikos Gorge is reason alone to visit Pindus National Park. This epic chasm is the world’s deepest canyon, and it offers natural drama and beauty in abundance. The steep sides of the gorge are clad in a dense covering of trees, which makes hiking here a real pleasure.

In summer, the streets provide welcome shelter from the blazing sunshine, and in September, the maple, oak and beech trees explode in a stunning display of autumn colors.

The gorge lies on the southern slopes of Mount Tymfi, and extends for 20km. it’s possible to walk the length of the gorge, but the best views (and photo opportunities) are found at one of several viewing points at the head of the chasm. You’ll stand on a head-spinning precipice looking down onto this epic canyon. For a view you’ll never forget, try to reach the viewpoint just before sunset, when the vegetation glows and shimmers with the last light of the day. 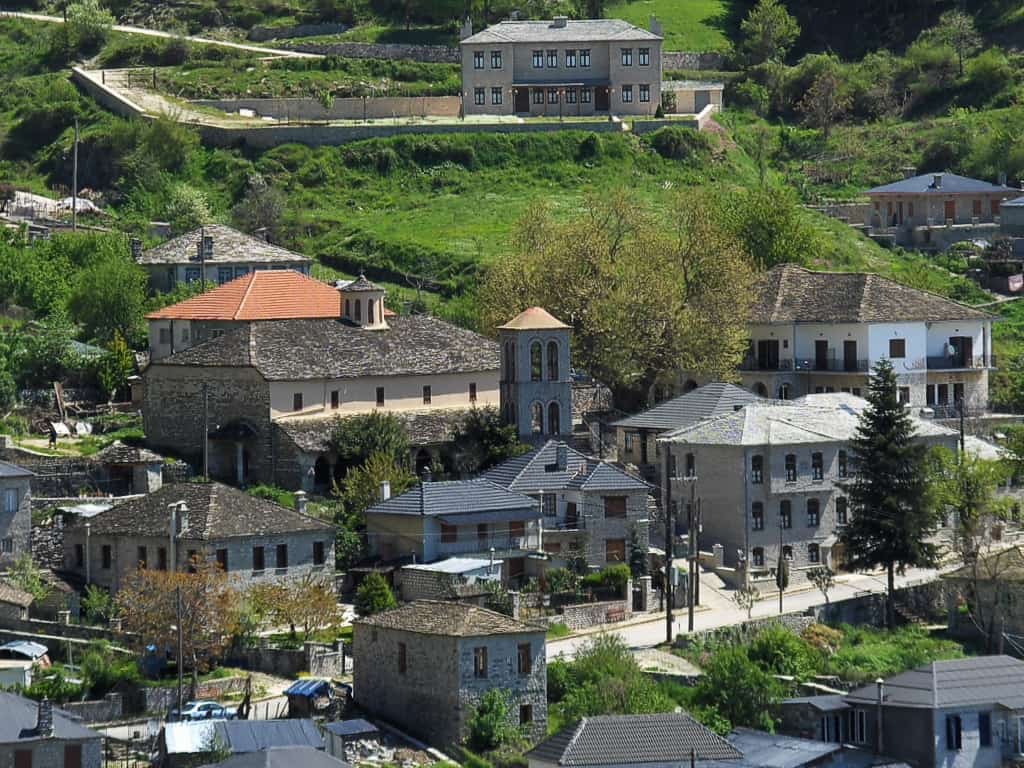 The 46 villages of Zagori, scattered around the Pindus National Park, are an important part of Greek heritage. These picturesque villages are known for their distinctive stone houses, nestled in verdant hillsides and connected by traditional arched stone bridges.

Instead of the traditional red roofs, these delightful houses are covered in a shimmering gray color, which gives them a unique and striking appearance. Completely unspoiled by mass tourism, these villages are a pleasure to explore, and if you’re looking for a place to unwind for a few days, some of the prettiest houses have been converted into guesthouses. Life moves at a slower pace here, making it the perfect place to come for some rest, relaxation and fresh mountain air!

This network of villages is connected by beautiful stone paths and bridges, which span the rivers and gorges that wind their way through the park. Most of the bridges date from the Ottoman period (particularly the 18th and 19th centuries) and are named after wealthy local patrons and Ottoman commanders. They represent a considerable feat of architectural achievement, with graceful arches and impressive stonework.

One of the most popular things to see and do in the Pindus National Park is to visit the ‘stone forests’ near the village of Monodendri. Otherwise known as ‘Petrodasos’, these weird and wonderful rock formations were formed millions of years ago, creating distinctive layered stone columns that were built up from stratified rock deposits.

This strange and eerie landscape may be found just a few kilometers from Monodendri, on the path to the Oxya viewpoint, which provides an incredible vista over the Vikos Gorge. Don’t miss this unique sight during your trip to the Pindus National Park.

This part of northern Greece is littered with beautiful, atmospheric monasteries, built in the same unique architectural style as the villages of Zagori. Some of these stunning religious monuments date from the 7th century, and most have been centers of worship for hundreds of years.

These medieval stone monasteries are often decorated with colorful frescos, wall paintings and wooden carvings, and frequently sit at spectacular viewpoints, looking out over the lush hillsides and craggy peaks.

Although many of them are no longer in use as functioning monasteries, they still represent an important part of Greek history, and recall a time when this region formed part of the medieval Byzantine Empire. There’s no finer place for a little reflection and contemplation! 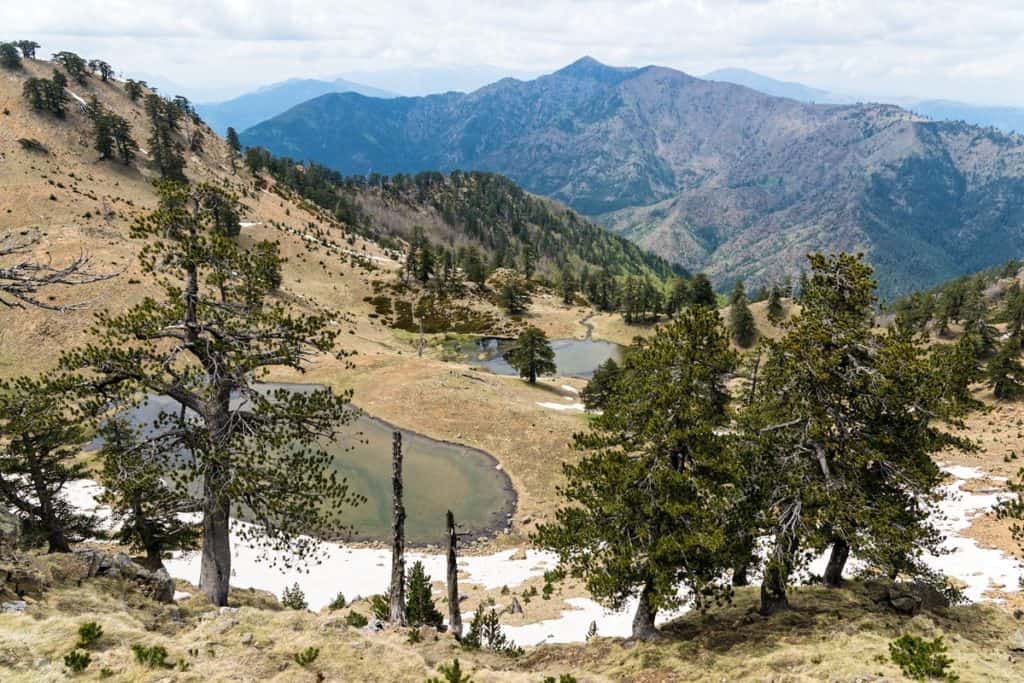 The relative isolation of the Pindus National Park, and the fact that it has largely avoided the negative effects of mass tourism, means that it is home to a wide variety of rare plants and animals.

You’ll find unusual types of lilies, daffodils, and tulips, in addition to many beautiful orchids. Endangered snowbells and irises can be found alongside the hiking trails, and in the right season, you’ll have the chance to spot plenty of weird and wonderful mushrooms.

The tree-clad mountainsides are covered in maples and black pines, creating a fragrant, magical atmosphere as you walk along the shady paths through the gorges.

Pindus National Park is also an important habitat for several endangered types of mammals and birds. Bear, wolves, wild cats, otters, deer and wild boar can all be found throughout the park, although you’ll need to keep a low profile if you hope to spot them!

You may, however, catch a glimpse of a golden eagle or an Egyptian vulture, circling high above the peaks in search of a quick meal. Other birds of prey include ospreys and golden hawks, and you may also see (or hear) various types of woodpecker. With lots of endemic species of amphibians and fish, wildlife lovers will have a wonderful time exploring this natural haven.

The villages of the Pindus National Park have a long and proud history, and a unique and fascinating local culture has developed here over the centuries. Under Ottoman rule, the community had a semi-autonomous status and became an important center for trade, textiles and folk medicine.

Today, local residents are (quite rightly!) proud of their distinctive culture, which is characterized by certain types of dress, folk songs and music.

What are you waiting for? Put this beautiful, fascinating region on your travel bucket list!