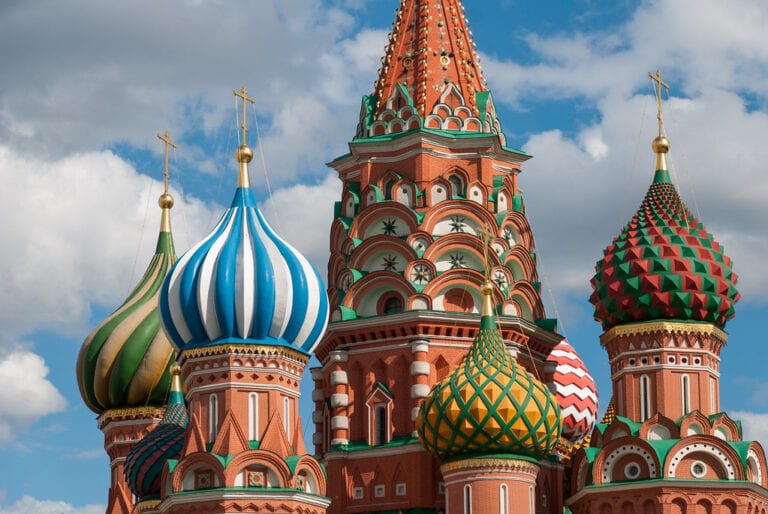 Russia is open to tourists from 67 “friendly nations.”

Visitors are advised to check with local authorities for current restrictions.

The Russian government has temporarily suspended flights from/to multiple countries around the world due to its invasion of Ukraine.

Related:
– Is China open for tourism?
– When is U.S. reopening? – Who Can Enter?

After the island nation’s aviation authorities blocked the departure of a Russian airline flight from Colombo airport a few days ago due to a court ruling, Aeroflot has banned its flights to Sri Lanka.

An enjoining order granted by the Colombo Commercial Court earlier this month prevented the departure of the flight carrying 191 passengers and 13 crew members from Colombo airport to Moscow, according to airport and aviation authorities.

Back in April, Russian Prime Minister Mikhail Mishustin said the country would offer flights to and from 67 friendly countries, including China, Argentina and South Africa, that are not on the list of countries that have imposed sanctions on Russia for its military attack on Ukraine.

Who can travel to Russia?

Can travelers from other countries travel to Russia, what are the requirements?

The categories listed are meant to help transition to normalcy incrementally as the government monitors any shifts in Covid-19 cases. It only applies to travelers from “friendly” countries.

Russia is currently allowing specific categories of people to travel if they have proper documentation and follow health and safety protocols:

People should continue to practice infection control methods even though Moscow does not require residents to wear a mask while walking on the street.

Residents can walk around Moscow without Contact Tracing or a Digital Pass to identify if they have had any close contact with positive Covid-19 patients.

In early 2020 the Azerbaijan Tourism Board reported that the country’s tourism sector was growing. That year alone, 426,000 tourists from 149 countries had traveled to Russia, accounting for 17 percent growth in tourism from the previous year.

The pandemic plummeted the growth of international tourism. Whether it was to see Moscow or the countryside Russia drew tourists worldwide.

Painted in history but with all of the modern amenities. Tourists come to Russia to be swept away. In Moscow, the Kremlin and the Red Square never disappoint with their unique tours and color architecture.

Saint Petersburg attractions are walkable and concentrated around the Winter Palace. Cities like Moscow and St. Petersburg have convenient public transportation options. The adventure seekers will head out to Mount Elbrus.

Reasonable flights and an array of accommodations are available to fit every budget.

According to the Executive Director of the Russian Association of Tour Operators (ATOR), Russians alone completed more than 10.1 million tourism-related trips overseas in 2021.

Experts believe that if the current situation does not change, the tourism industry’s recovery will be further delayed owing to economic ramifications in West Asia as a result of this “war-like scenario.”

According to the Irish Oireachtas Committee on Transport, airspace restrictions imposed to clear the way for Russian military drills have now been lifted because the country has moved its drills to an “undetermined” location.

The Irish Aviation Authority (IAA) will inform members in its opening statement, that it received formal notice to lift restrictions, according to RTE news.

Additionally, Russian Ambassador Yuri Filatov will appear before the Oireachtas Foreign Affairs Committee, to discuss the decision of relocating the drills.

According to the Committee, civilian aircraft will again be able to travel as usual.

Although the country has lifted quarantine for allowed international arrivals, it’s good news to know Russia has decided to cut quarantine from 14 to 7 days if infected while in the country.

On Tuesday, Deputy Prime Minister Tatyana Golikova, who heads the country’s coronavirus task force, stated that health officials are “optimizing our approaches to quarantine and testing of our citizens, including shortening the quarantine period to seven days.”

Other policy adjustments will be implemented in the following days, according to the Minister.

Russian officials have backed down from imposing restrictions against unvaccinated people.

Citizens across the country began holding rallies and launched online petitions in response to the new rules that were supposed to come into force in February.

“We need to be balanced when working out these decisions so that the opinion of the people is taken into account,” said Deputy Prime Minister Tatyana Golikova, who runs Russia’s state coronavirus task force.

Also, Russians who were vaccinated in other countries will now be eligible to receive vaccine certificates.

Russian authorities have decided not to ban flights from Southern African countries but impose a severe 14-day quarantine on all arrivals from the area.

Also, nationals returning from places where air travel has not been fully restored will also have to observe a 14-day quarantine.

The Russian president said Tuesday that he has instructed the government to prepare an action plan to tackle the Omicron strain by next week.

The Russian government plans to request proof of COVID immunity for air and railway travelers up to June 1, the Transport Minister told reporters on Friday.

“Specific medical documentation… will have to be presented during the purchase of tickets and at the boarding whether it is a plane or a railway carriage,” the minister said.

The date when this new restriction will be enforced is yet to be released.

With more than 500,000 daily deaths, a rising number of infections and a huge portion of the population reluctant to get vaccinated, Russia is facing the worst wave of coronavirus seen since the pandemic began.

Russia reported 24,465 coronavirus cases in the past 24 hours, which is the highest daily number since July 19, the anti-coronavirus crisis center said on Tuesday.

In view of the new spike, the regional response centers had to reimpose Covid-19 related restrictions that had been lifted more than a year ago.

Regardless of the epidemiology situation, Russia has continued resuming flights. Last week, the country reopen skies to flights from Moscow to Bukhara, Samarkand, Urgench, Namangan, Andizhan, and Termez in Uzbekistan.

September 16 – Russia set to restart flights with Spain, Kenya, Slovakia and other countries from Sept. 21

Russia’s coronavirus task force announced that some of its flag carriers will restart operations to Spain, Iraq, Kenya, and Slovakia from Sept. 21

So far, the government has confirmed four weekly flights between Madrid, Barcelona, Bratislava, and Moscow.

Given the positive epidemiology situation, it will also increase the number of airports serving routes to Turkey and Egypt.
Source: Reuters

The Kremlin has refused to impose mandatory vaccination in Russia and, conversely, has created multiple strategies to boost vaccinations, mostly with mixed results.

Now the government has launched a lottery that will give 1,000 vaccinated Russians the equivalent of US$1,350.

On August 26, the country officially registered its 5th coronavirus vaccine, EpiVacCorona-N, according to a report by Interfax. The Health Ministry announced this one is an upgrade on the already-approved EpiVacCorona.

Russia will lift its travel ban on outbound flights to Czech Republic, Dominican Republic, and South Korea from August 27, according to a TASS report.

“Following discussions and considering the epidemiological situation in certain countries, the decision was made to lift restrictions on international regular and non-regular (charter) flights from Russian airports to the Dominican Republic, South Korea and the Czech Republic starting from August 27, 2021,” the statement reads.

Also, commercial fifths to Hungary, Cyprus, Kyrgyzstan and Tajikistan will be increased from the same date.

The country also plans to resume flights to Egypt on the same date after a six-year halt (not COVID-related).

“From August 9, the number of flights to Europe will be increased, with Moscow-Hurghada and Moscow-Sharm el-Sheikh flights adding up to five flights per week for every route,” said the Russian Anti-coronavirus Crisis Center. (Source).

Russia “officially” resumed flights with France and the Czech Republic on July 24. However, local media says this is just a formality since no airline has announced plans to resume flights with these two countries.

June 26 – Russia to resume flights with the U.S. and other 8 countries from June 28

The Emergency Response Centre to prevent the import and spread of the novel coronavirus has green-lighted the resumption of international travel with the U.S. Belgium, Bulgaria, Jordan, Ireland, Italy, Cyprus, and North Macedonia from June 28.

In a separate report, the Russian government announced that passenger flights with low demand can be canceled or merged with other services with short to no prior notice.

June 10 – Russia to resume flights with 8 countries from June 10, and working on 30 more from August

The country is also working to expand the offer to other 30 countries from August. For now, the Ministry of Health has reported that Hungary, Germany, Denmark, Italy, Netherlands, Norway, Poland, Finland, China, Vietnam, Mongolia and Sri Lanka have a “satisfactory epidemiology situation” so these could be considered for the next reopening.

Authorities will require all foreign and national citizens arriving in Russia to present a negative test for COVID-19, taken no older than 72 hours before departure.

May 25 – Russia resumed flights with Malta, Iceland, Saudi Arabia, Mexico, and Portugal on May 25

Russia has been increasing the number of countries they are open to. As of today, travelers from 28 countries can travel to Russia under different conditions.

As part of its reopening to the world, Russia has resumed commercial flights with Malta, Iceland, Saudi Arabia, Mexico, and Portugal, starting today, May 25.

The country has also increased the frequency of flights with South Korea, Finland, Japan and even South America.

Among other good news, Russia is setting everything up to resume flights with Bulgaria from June 1. (Source: GardaWorld)

Due to the high incidence rate of COVID-19 in some countries of concern, Russia has decided to limit flights coming from Turkey until June 1, and banned flights from Tanzania, a country whose authorities have refused to take any actions to contain the spread of the virus.

Besides, Russian authorities have also extended the suspension of all commercial flights with from/to the UK until June 1 for the same reasons. Only diplomats and persons holding special visas, such as Highly Qualified Specialist visas will be granted entry.

For its part, travelers arriving from India will have to self-isolate immediately upon arrival until they test negative for the virus, at which point they may exit quarantine. Any violations of an order to self-isolate may result in a fine of 4,000-5,000 rubles.

April 23 – Russia to resume flight operations with Egypt and Italy

Despite their political differences, both Egypt and Italy have agreed to reopen to Russian tourists by summer.

The announcement was made after a phone call between the Russian President Vladimir Putin and the Egyptian President Abdel Fattah al-Sisi. Flights to resort destinations in Sharm al-Sheikh and Hurghada had been canceled after a Russian passenger plane crashed in Sinai in October 2015, killing 224 people.

Likewise, Russian media reported this week that Italy will be taking Russian tourists after a visit an “Italian ambassador” paid to the Russian government.

In both cases, the official reopening date has not been confirmed yet but local media has mentioned summer as the best time.