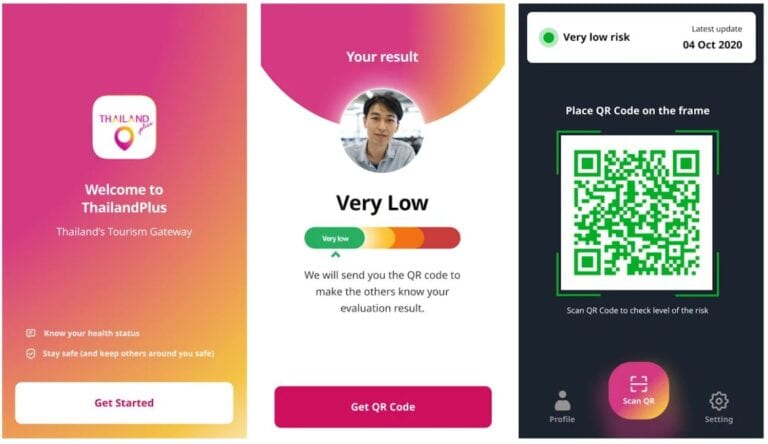 Those who are interested in visiting Thailand while being as safe as possible will be pleased to learn that the country has introduced a COVID-19 tracking app to help them do that.

It will utilize GPS tracking and QR codes to ensure that visitors are informed if they have come in contact with someone who has been infected with that virus.

The app, which is called ThailandPlus, is mandatory; it and GPS tracking must be turned on and remain on throughout the visitor’s time in Thailand. It must be downloaded prior to arrival in the country as well.

While there, visitors will use QR codes to check in and out of establishments such as shopping centers, tourism attractions, restaurants and accommodations.

The intent behind ThailandPlus is to not only keep visitors safe but to also protect Thai citizens and residents. In relation to the latter, this program will also help Thai officials develop an encompassing plan for limiting and controlling any outbreaks.

Travelers themselves will be represented by a QR code. This will initially be displayed in green, indicating a low risk of infection as they will have had a negative COVID-19 test result from within the 72-hour period prior to departing for Thailand.

Tourists who are interested in experiencing Thailand should also take into account that they must participate in a 14-day quarantine in addition to having that pre-flight negative test result while additional PCR tests will be required as well.

However, countries that had been limited to 30-day visa-free stays have had those extended to 45-day periods. Included in this group are visitors from the United States.

Thailand currently has a relatively low number of cases, less than 1,000 active ones. It had experienced a spike in December after an outbreak occurred at a food market in Samut Sakhon, which is part of the Bangkok Metropolitan Region. However, control has been mostly regained since then.

The entire country is either labelled green (surveillance), yellow (high surveillance) or orange (controlled) with the exception of Samut Sakhon, which remains red (maximum controlled). However, even in that latter location, shopping centers and restaurants remain open.

Regardless, masks are required while in public, including outdoors, throughout Thailand, and temperature checks are regularly done.