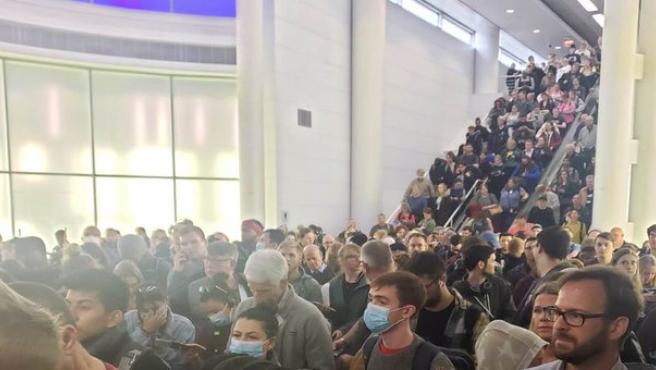 Millions of Americans are traveling in the days leading up to Christmas despite pleas from public health officials to stay home and prevent the spread of COVID-19, which is surging in many areas of the United States.

The Transportation Security Administration reported that more than 3 million passengers passed through security checkpoints at U.S airports over the weekend as people kicked off their holiday vacations. TSA officers screened 1,066,747 passengers on Friday, 1,073,563 on Saturday and 1,064,619 on Sunday.

Still, passenger numbers are down sharply from 2019. Saturday’s volume was down 57%, or approximately 1.5 million passengers, compared to the same day last year.

The holiday airport rush comes as the U.S. endures its largest rise in coronavirus cases since March. Health experts suspect the latest outbreak is linked to the increase in travel and family gatherings that took place over Thanksgiving.

Before Thanksgiving, the nation’s seven-day rolling average of new reported infections was approximately 176,000 per day. After the holiday, the average spiked to more than 215,000 per day.

The mounting cases are pushing hospitals in many areas to their breaking points. Arizona, California, North Carolina, Ohio and Pennsylvania are among the hardest hit states.

Fearing that people will further spread the virus by visiting friends and family between Christmas Eve and New Year’s Day, the Centers for Disease Control and Prevention has issued an advisory reminding people that postponing travel plans and staying home is “the best way to protect yourself and others” from COVID-19.

In California, officials have issued strict stay-at-home orders to nearly 99% of the state’s 40 million residents

Despite the public health warnings, AAA estimates that around 85 million Americans will travel by plane, train, bus or car between Dec. 23 and Jan. 3.