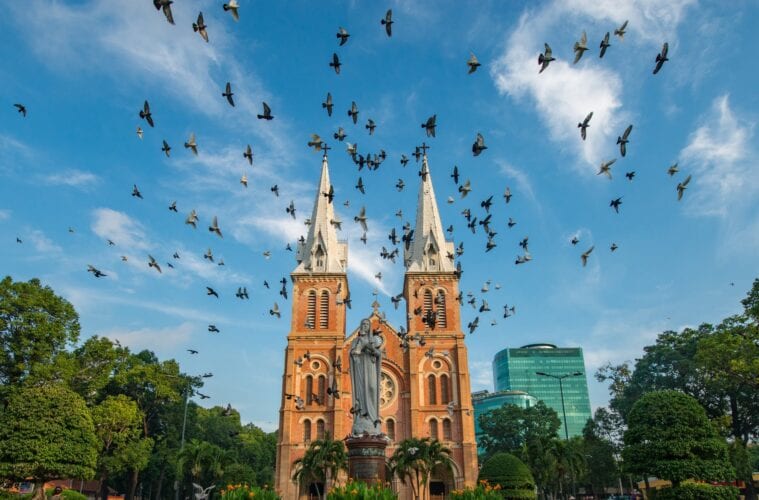 This Southeast Asian was once a French colony and still has examples of French-style architecture as well as having a French influence in its cuisine.

Travelers can enjoy these as well as the beautiful beaches and lush tropical forests, winding rivers, beautiful Buddhist temples, and vibrant modern cities.

In its capital, there is a marble mausoleum for Ho Chi Minh while Ho Chi Minh City (formerly Saigon) has a plethora of tourist attractions.

Vietnam is opening borders and resuming flights with 6 countries in Asia. There will be flights available between 6 different cities but all passengers will need to quarantine for 14 days.

This move is a plan by the Government to start rebooting the economy with the most important business partners.

This is the list of cities allowed to travel to Vietnam:

As of September 8th, Vietnam reported only 1,054 positive COVID cases and 35 deaths, which is one of the lowest rates in Asia. The Government had a plan to reopen earlier but there was a spike in positive cases in the end of July.

The impact of the Coronavirus on Vietnam

A National Steering Committee was formed for Prevention and Control. As of March 6th, 10,000 test kits were produced daily.

As can be seen from the data, these measures were initially effective. Vietnam has had fairly low rates of the virus overall, with only 989 cases and 26 deaths. However, around July 29th, there seems to be a surge in cases.

Just a few weeks ago, Vietnam was considered a success story at curbing the ravages of the pandemic. It acted fast once information about the virus became available. It closed its borders in early March and quarantined and tested returning citizens at government centers. Widespread testing and contact tracing occurred.

By Mid-July, the country seemed to have the situation under control so the government eased restrictions. Schools were reopened, as had restaurants, cafes, and sports stadiums. For the tourism industry, there was hope life would return to normal. However, by the end of July, this hope was shattered as the number of cases started to spike.

Noted epidemiologist Prof. Michael Toole stated that this type of resurgence is common with this particular virus. He points to other countries, such as Hong Kong, Spain, and Australia. He commends Vietnam on responding just as quickly to the latest threat.

Lockdowns have been re-imposed in hot spots, and travel restrictions are in place. Testing has increased.

Festivals, religious events, sporting events, and all other large gatherings are no longer allowed in most places. Non-essential businesses such as bars, clubs, etc., remain closed as well. In some places, even stricter restrictions are mandated. In Danang Province, for example, gatherings of more than 2 people are not allowed.

The Vietnamese government has a very informative site that discusses the state of the pandemic in the country.

While the current lockdowns are expected to have an economic impact on the country, people are optimistic. There is a great deal of confidence in the government thanks to its successful response early in the year. Projections are good that the economic repercussions will be mild.

Since March 22nd, Vietnam’s borders were closed to tourists. Only Vietnamese nationals and those conducting either official or essential business were allowed into the country.

All those arriving were required to undergo testing and a 14-day quarantine.

They must fill out an online medical declaration and provide the location where they are residing.

Foreigners are expected to follow the same rules as local residents. They will be fined if they fail to wear a mask in public or follow other rules.

Dating back to 2000 BC, Vietnam has one of the most ancient cultures in South East Asia. Since then, it’s been influenced by the Chinese as well as Khmer, Indians and of course the French, who colonized the country.

One area in which the French influence can still be seen is the country’s coffee culture. This makes it unique in a region more known for tea.

The local brew is generally a French roast, often served with sweetened condensed milk. However, you can also try it black or with coconut milk, an egg yolk or yogurt. No matter what you add to it, you’ll find the coffee itself among the best in the world.

The cuisine is also unique and delicious. From refreshing soups to French inspired sandwiches and exquisite tropical fruits, you’ll find your taste buds will be delighted by your visit to Vietnam.

There are also beautiful beaches, magnificent mountains, and budget accommodations. The people are generally friendly. One way to experience the local culture is to shop in the roadside markets. Here you will not only find delicious food, you’ll also be able to shop for local crafts.

Guided tours can take visitors through a variety of natural wonders. In the north, there are many lakes and limestone caves.

In Central Vietnam, visitors enjoy touring the red and white sand dunes. In the southern part of the country, the Mekong Delta provides a look at an ancient lifestyle with its houseboats and river people. It is also rich in biodiversity – 10,000 new species have been found here.

Vietnam is an interesting and beautiful country in Southeast Asia. While it is currently undergoing another resurgence of the coronavirus, given how quickly the government got things under control, there is hope that the country will be able to open for tourists soon.

When it does, it would be a great place to visit with its stunning natural beauty, ancient culture and delicious food and coffee.