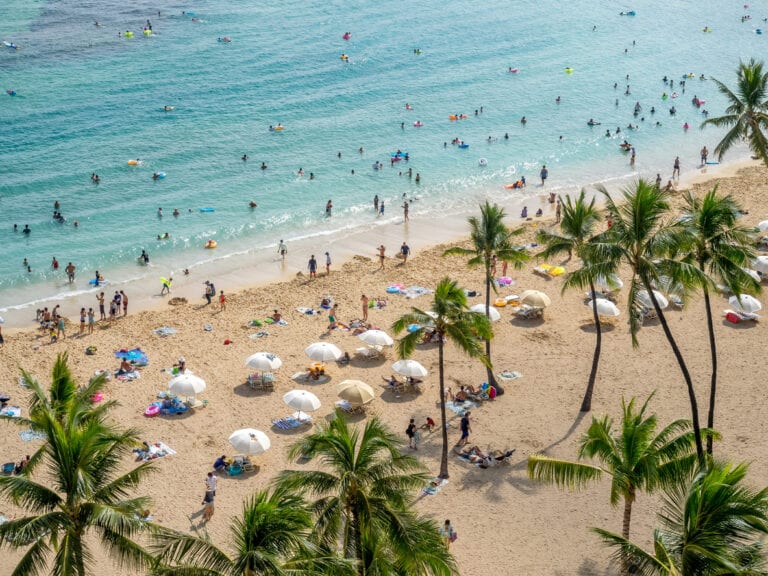 Hawaii’s tourism industry continues to show signs of recovery in March, with arrivals in the state hitting their highest levels in nearly a year.

On March 13, around 26,400 transpacific and interisland travelers were screened by Hawaii’s Safe Travels program, a single-day record since the pandemic began. Of those travelers, approximately 18,700 came to the state for vacation or pleasure, according to data from the Hawaii Tourism Authority.

The numbers put Hawaii on track to reach pre-pandemic tourism levels, which hovered around 30,000 arrivals per day, in the near future.

Most experts predicted it would take years for the state’s tourism industry to fully recover, but spring break, increasing vaccinations in the mainland U.S. and pent-up demand for travel are fueling a faster comeback.

Mufi Hannemann, president and CEO of the Hawaii Lodging and Tourism Association, told Hawaii News Now that a mixture of visitors has been visiting the state in March.

“I checked with our hotels and partners,” Hanneman explained. “They said they’re seeing it across the board, the budget-conscious traveler that wants to come and bring their family, young adults who are on spring vacation who are longing to come to a place where they can have fun in a safe and healthy way and those who can afford to come to Hawaii and stay at the resort.”

Some tourists are also impressed with the state’s travel restrictions, which have kept coronavirus infections on the islands relatively low.

“I feel very good about travelling here,” Jackie Bornstein, a vaccinated visitor from Los Angeles, told the Associated Press. “[Hawaii is] being very conscious about having people tested or, if they haven’t been tested, having to quarantine.”

Bornstein, who arrived in Honolulu on March 15, said she was vacationing in Hawaii for eight days and planned to come back. She also confessed that she didn’t feel as safe visiting other states.

“I have a son that lives in Texas,” she said. “I’m not so comfortable going there where there are no masks.”

If vaccinations in the mainland U.S. and Hawaii continue to go smoothly, state officials plan to start a vaccination passport program as early as May. Under the plan, inoculated visitors could avoid most of the state’s travel restrictions, including pre-testing and quarantine requirements.

As spring approaches, travel is steadily increasing throughout the U.S. According to the Transportation Security Administration, nearly 1.36 million people passed through American airport checkpoints on March 12, making it the busiest screening day since March 15, 2020.

On the same day, the U.S. Centers for Disease Control and Prevention announced that the U.S. has administered more than 100 million COVID-19 vaccine doses.

However, while the vaccination numbers are encouraging, the CDC is urging Americans to exercise caution when traveling.

“We have seen footage of people enjoying spring break festivities, maskless,” said CDC Director Dr. Rochelle Walensky during a White House briefing. “This is all in the context of still 50,000 cases per day. I’m pleading with you for the sake of our nation’s health.”