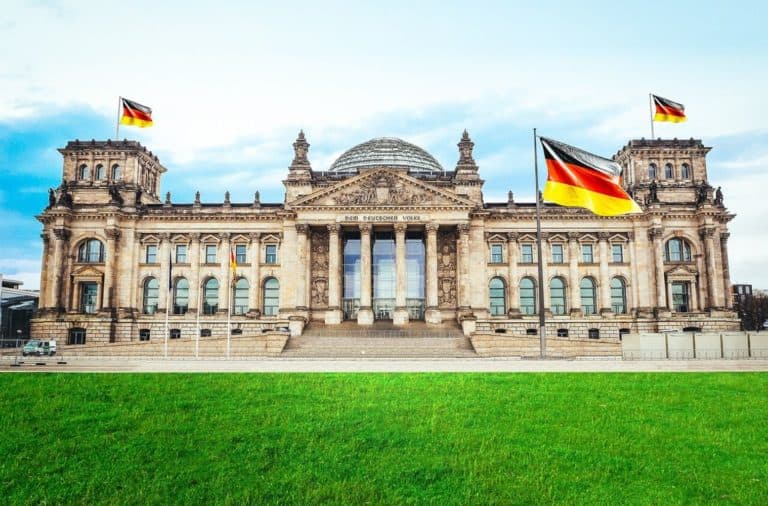 Germany is a country that has been one of the most influential powers in the world for its strong economy.

Visitors get enthused by the awe-inspiring selection of intriguing historical sites of Germany.

If you are planning to visit Germany anytime soon make sure you visit the following historical sites and landmarks!

Brandenburg Gate is one of the most iconic landmarks in Germany that once used as a gateway to the city.

Found in Pariser Platz, Berlin Germany, this infamous structure was modeled after the Acropolis in Athens making you have a feel of Ancient Greece. This was the first neoclassical architecture built for King Frederick William II of Prussia in 1791.

This monument represents unity and freedom among the divided German nation that has withstood the test of time with over two hundred years. It’s truly a masterpiece and a must-visit attraction in Germany.

~ Traveling to Berlin on a budget? Check out our roundup of Best Hostels in Berlin

If you are a fan of Disney’s fairytales, most of the castles created in the theme parks are inspired by this royal castle. This was built by King Ludwig II of Bavaria between 1869 and 1886. When you enter Neuschwanstein castle, you will see colorful symbolic paintings influenced by religion and political ideologies due to the king’s fascination to Richard Wagner, a renowned composer.

You will be surprised to see that this medieval castle is equipped with modern and state of the art technology of that time. This is one of the most visited attractions in entire Europe. It has to be the best of all the German Castles.

Reichstag dates back to 1894! It was designed by Paul Wallot during the regime of emperor Wilhelm I.

In the beginning, the building was used as a place for the German parliament and was also a place where German Weimar Republic was proclaimed in 1918. In 1933, the building had a big fire and later on was also badly bombed during the Second World War.

After the 2nd World War, there was reconstruction deployed to keep this important historical landmark. It was finished in 1999 and since then, it hosts the current German parliament again.

The fascination with Bamberg Hall comes as no surprise to anyone. As the legend and rumors go, in 1467, the bishop of Bamberg would not give land to the residents for a town hall which they desperately wanted as a result of the former having been destroyed. The river has arched bridges linking the city; the driven townspeople gathered to create an artificial island on the river Regnitz by ramming stakes into the water.

The influences of the artwork come from Gothic styles, but the building contains Baroque and Rococo traces from Johann Jakob Michael Kuchel from 1756. The frescos that adorn the exterior are as impressive as the artificial island that the building sits on. Utilizing Trompe d’oeil architecture, the murals emanate almost a three-dimensional feature. The traditional German architecture of fachwerk decorates the exterior too.

No trip to Germany will be complete without a tour in Berlin. Berlin Wall has been a symbol of the Cold war separating the East and West Germany from 1961 to 1989.

An amazing fact is this wall was built within the day using a barbed wire fence and became known as the “Iron Curtain” between East and West Germany.

Every visitor must see at least the remains of this wall covered in graffiti depicting the tragic times when thousands of people sacrificed their lives. Along the tour, you will truly understand the history behind the torn-down wall by walking along any part of its 155km long concrete barrier.

Castles dot the landscape of Germany, adding to the fairytale vibe of this magical land. Your trip to Germany is not complete without visiting the famous Heidelberg Castle.

Located in the charming town of the same name, this castle has been enchanting visitors for centuries. Heidelberg is situated on the Neckar River in southwest Germany. The castle and its ancient ruins tower high over the town, providing a focal point for visitors and locals.

The castle features a balance between the Gothic and Renaissance styles of architecture. The imposing building has been destroyed and rebuilt many times throughout history, adding to its allure. The fortress is surrounded by a tranquil park and gardens, providing a beautiful place to relax and take in the splendor of the castle.

Visitors can tour the exterior of the castle on their own or choose a guided tour to get a peek inside the building. From the Great Terrace, you will be rewarded with sweeping views of the town of Heidelberg, the Neckar River, the quintessential red village rooftops, and the iconic bridge that straddles the waterway. The on-site apothecary museum is also worth your time when visiting one of Germany’s most beloved castles.

Also known as the Memorial to the Murdered Jews of Europe, this moving attraction pays homage to the Jewish victims of the Holocaust era.

The memorial is conveniently located adjacent to the Tiergarten in the Friedrichstadt district of Berlin. With its close proximity to the Reichstag building and the Brandenburg Gate, it is easy to fit a visit to this memorial into any Berlin travel itinerary.

As is fitting, the monument and memorial are located on a section of the former Belin Wall. Before the city was liberated, the location had served as Hitler’s command center with both the Chancellery building and his private bunker located nearby.

The visual highlight of the memorial is the 2,711 concrete slabs that are open for viewing day and night. Opened since 2005, the memorial has served as a place of quiet contemplation and remembrance for millions of visitors. The openness of the memorial creates a unique place to reflect on the horrors of this time in history.

In addition to the primary remembrance area, the venue also features an underground information center. Here you will find information about the victims, photographs, and various artifacts detailing the persecution and its consequences.

This historical site dates back to 15 BC when a city of Trier was established by Romans. Around 306 BC Romans started the development of the city that included baths as well.

The city of Trier was very important and takes a big part in diverse German history. Trier used to be called “second Rome”.

It’s actually the biggest Roman Ancient Baths that was ever built outside of Rome.

Another popular landmark of this Roman history is “BASILICA OF CONSTANTINE” which was also built in that era. In the 5th century, the basilica was destroyed by German forces but later on, was rebuilt and stands until now and takes part in UNESCO World Heritage.

The Holstentor is known as the “Holsten gate” is one of the remnants of the medieval defenses in Germany. It was built in 1464 and serves as one of the remaining relics of the Hanseatic city of Lubeck.

Holstentor has been a UNESCO World Heritage Site since 1987 due to its two fascinating round towers and arched entrance.

It’s considered as one of the top tourist attractions in Germany together with the old city center in Lubeck. Discover more of this amazing attraction inside its museum to understand the history of its glory medieval days.

A well-known landmark for centuries lays the greatest Gothic cathedral in Cologne, Germany. The cathedral began its construction in 1248 and took painstaking 600 years more to complete due to interruptions.

Cologne Cathedral is a building that embodies the strength of European Christianity dedicated to Saints Mary and Peter. Now it is dedicated to the seat of the Catholic Archbishop of Cologne.

The Cathedral is now regarded as one of the most important pilgrimage destinations in Europe making more visitors come and see the magnificent church.

Hohenzollern House dates back to nearly 1000 years ago in present-day Germany and it’s considered one of the most important historic places in Germany. Mentioned more than 200 years later, the castle compound and there is still not much known about the original castle including what it looked like and the size of it.

However, it must have been an impressive monument of the day since historical sources highly praised it. It was known as the “most fortified House in Germany,” and it quickly became the high point of all the castles in Swabia; albeit, the castle was destroyed in 1423.

It was a short 30 years later, in 1454, that the second construction of Hohenzollern Castle began and it was even more colossal and impressive than the first. The castle underwent the changing of hands concerning ownership during the Thirty Years War as it shifted into a protective fortress. The castle, unfortunately, disregarded by those that had admired the fortress, quickly became a shadow of its’ former self.

Broken and left to ruin, Hohenzollern Castle soon found a champion in Crown Prince Frederick William of Prussia. In 1850, he started restoring the castle since it was a place that was near and dear to him. Using neo-Gothic styles, he created one of the most striking castle compounds in all of Germany. The numerous towers and fortifications make it to this day a masterpiece and one of the unique castles. Not including the beautiful backdrop of mountains in Swabia, it is a sight to behold.

On a small island on Lake Schwerin lies Schwerin Castle and is one of the continent’s shining illustrations of the historical architecture that Europe has created. First recognized in 973, the location initially picked as a Slav garrison for the tactical advantages.

Franz commissioned the castle to be rebuilt and only used the finest architects during the mid-1800s. There are 653 rooms and each one handcrafted to showcase the magnificence and sheer detail of the whole castle. Although, the throne room is still considered the piece de resistance as the columns are made from a special marble and unique cast iron doors.

Take a walk through the ancestral gallery and the dining room with elaborate paneling. The round tower room was intended to be a salon and to this day continues to offer breathtaking views of the lake. Another part of the mass appeal is the extensive baroque gardens adjacent to the castle.

Historial landmarks that are close by include Mecklenburg-Western Pomerania or some know it as Wismar. The city center retains the look and feel of a classic 14th-century trading town that it once was. Friedrichsmoor is a country house that is a fantastic place to get a break and refreshment after a long walk through the neighboring countryside.

We hope you’ve liked this list of the most popular Germany landmarks and historical sites. Hopefully, you got some inspiration for your next trip and if you have some suggestions or feedback on how to improve this article, we would love to hear it. Please submit in the comment below.